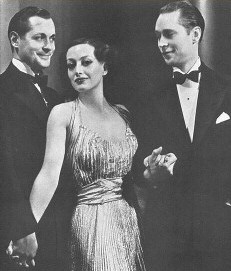 More Joan Crawford!
More Witty lines!
Another wise older relative! (Grandmother instead of mother).
And now with - large shaggy dog! (instead of the oddly precocious child, I suppose).

This seems to have been the prequel to the Women - in it one woman is determined to keep her playboy husband at home. At least in this version of the story the other woman is not an inhuman bitch and the man takes most of the blame for his own behavior.

Also, you have to love the grandmother - clearly she was the inspiration behind several Carol Burnett characters. It makes me very sad that I could not find a picture of her to share with you.

What is it with the 30s and divorce movies? I guess the 30s were pretty hard times for the family values crowd. These movies put the controversy at the center of the story, but the main characters end up not divorcing.

But then again, what movie has a happy divorce? It just doesn't make a good movie. Nope, the prerequisite of a romantic comedy is that it must end in marriage.

Philadelphia Story, The Awful Truth, The Women, His Girl Friday - all of these almost-divorce movies end with happy marriages - and three end with a recently divorced couple getting back together again and, presumably getting re-married to each other.

Joan Crawford's wardrobe could have won a best supporting actor award - except for the one that looks like the dog's post-surgery collar got stuck to her head by accident. They had some pretty out-there ideas in the thirties.

Cousin Edgar and Granny Fanny alone are worth the price of admission. Someday I will go back and transcribe some of the better lines for you.

Four Stars. Will definitely watch again - probably as a double-feature with the women.
Posted by Ms. Q at 11:55 PM

Don't forget The Parent Trap (although I think it was made in the '60s, not the '30s) on your divorcees-getting-back-together list.

Yeah, that really is the best I could do. I need to watch more old movies.

The Parent Trap is iconic! We taped it off TV in the eighties sometime and I watched it repeatedly, almost obsessively, when my parents were pre-divorcing.
The blonde girlfriend of the father is essentially the same character as the Baroness in the Sound of Music, don't you think?