I read that Katherine Hepburn was meant to have been considered for the part of Scarlett O'Hara. But the studio picked Vivian Leigh instead. And a good thing, too. Katherine's inherent Yankee-ness isn't the only reason that she wasn't right for that part...Hepburn was never petulant. You could see in Bringing Up Baby that some of the lines might have been meant for that...and in Pat and Mike she's supposed to be nervous and rattled by her fiance. Katherine just never seems really helpless, and as much as Scarlett is helpless at times - and petulant - Blanche Dubois is even more so. 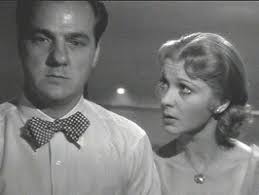 I first saw this movie in high school when I was reading Tennessee Williams plays for acting class, and I fell in love. I walked around talking in a soft little southern accent for months afterwards - albeit under my breath so no-one could hear me. There is just something about her character that is captivating. She is useless, vain, selfish, frail and, of course, increasingly crazy as the movie progresses. But you do get the sense that some great wrong was done to her. Some wrong that she couldn't help and that she doesn't know how to incorporate into her view of the world.

She's like a girl who was raised to think the world was all puppies and lollipops and then had a puppy die in her hands, choking on a lollipop. (hm, not my best metaphor, maybe).

Anyhow, you just want her to be happy and get out of Stella's hair, really. Because as much as you hate Stanley, you kind of feel for Stella - it's kind of like Stella and Stanley are Rocky and Adrian, if Rocky hadn't won the fight with Apollo Creed.

Stanley's not a bad guy, or so you think. Then he goes and forcefully messes up Blanche's chance at happiness - or at least a version of happiness.

That is one thing about TW's plays (and the movies made from them): they are beautifully sad portraits of beautifully tragic characters, but there is the sense that no-one is really happy or ever will be. Which I guess makes sense because if you were a gay kid growing up in the south there really was no chance that you were going to be very happy, was there? (I mean, apparently he had a partner and they were pretty happy but at the same time, he died choking to death on a bottle cap, drunk, so that's not a very happy picture, is it?).

So when Blanche loses her shot at semi-happiness, and Stella begins to descend into the third circle of hell that is a fight between your sister and your husband...you really start to hate Stanley. And of course that only makes the fragile Blanche more sympathetic, by comparison.

Like all TW plays, too, in this one there is a veiled sexual encounter that colors the whole play darkly.

There is no other movie that I would describe as "disturbing" "tragic" and yet "wonderful".

Four stars. Nevertheless, won't watch again for a while. It is disturbing and not something that you shake for a few days after watching it.

PS - I have not praised Marlon Brando here because I've simply never found his character that fascinating. He plays Stanley well, but Stanley is like lust and fate and resentment all rolled into one. Sure, Brando is great, but his character existed for me before I ever saw his portrayal.
Blanche was the character that haunted me, the character who was unique: she was a manipulative victim. Everything bad you could say about her was true: snobbish, self-absorbed, deluded, vain, over-sensitive - but she was still somehow precious and beautiful and innocent.
In that way she was something like Scarlett O'Hara if she hadn't been so resilient. It made an interesting character, and one that you can't shake after the movie ends. I'm quite sure Brando is an absurdly good actor and someday if I ever watch another movie with him in it I'll tell you all about it. But I think it's silly to put him on the cover of the DVD. It's not his movie.
Posted by Ms. Q at 1:06 AM