Q: What's not to love about Judy Holliday?
A: Nothing!
She's the best part of this picture, I'd say, and she gets to play a lighthearted but not lightheaded blonde. She's not too ambitious for herself, but she believes in things like her husband's crazy invention and radio contests and bright possibilities for her future. 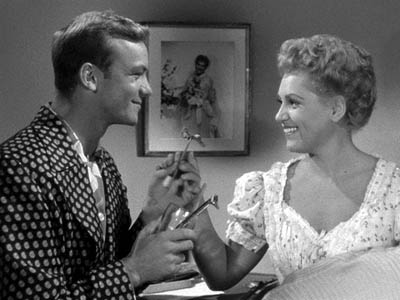 Judy Holliday and Aldo Ray portray a couple who are divorcing. The story of their marriage told in flashbacks is comic and dramatic in turns and probably plays better with a married audience.
The voice over cleverly does not always match the story as the audience can see it so we're lead to understand how both husband and wife are distorting their side of the story as they are telling it to the judge.
It's reminiscent of the Crowd if anyone has seen that silent film - the young couple living the American dream in the city, trying to make ends meet, having a family, eventually encountering hardship.

Through it all there are glimmers of the couple being something a little bit better than they think they can be - enough to make you believe the judge's conclusion that they will not get a divorce after all.
Of course, she's right, they make up and stay together. It IS a romantic comedy after all.
Not a first date movie, though. One to rent to watch with your spouse during a difficult year.
Posted by Ms. Q at 5:47 PM