I love this movie. I tried to watch it outside at the Boston Harbor Hotel last summer, and a thunderstorm half an hour into the movie foiled my attempt. Now a year later, I have finally seen it again. Four stars... plan to see it many more times. Why do I love it? Because it is fifty years old, and yet the comedy is still hilarious... Jack Lemmon and Tony Curtis are perfect... It is immensely quotable... It's just so funny.

Joe (Curtis) and Jerry (Lemmon) have to flee town when they accidentally witness a mob mass killing. Best way to skip town? Dress up like women, of course, and join a women's band on its way to Florida. 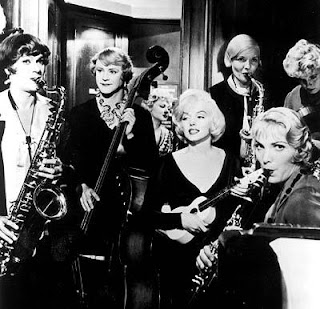 Hilarity ensues as both men take turns falling for their band mate Sugar Kane (Marilyn Monroe), who confides to Joe's alter ego Josephine that she is hoping to meet a dashing millionaire in Florida. Even more hilarity as a millionaire man falls for Jerry's alter ego Daphne.

And the wonderful ending. If for some reason you have never seen the ending or had it quoted to you and you just love surprises, don't watch.

A classic, what more can you say? The physical comedy, the wit, the plot, the characters. 30 Rock even used it as the central reference point in an episode this spring...as if I needed more reasons to love 30 Rock!

This is definitely one of my favorite movies. And you are right, the ending couldn't be more perfect.

Most definitely in my Top 5! One you can easily watch over and over