This movie has all the right ingredients for a fun comedy... Judy Holliday, silly plot twists... But the songs almost kill it. I guess when you put Dean Martin in a movie, you have to make him sing something. The songs are ridiculous and often painful, though. They are vehicles for predictable and sometimes nauseating rhymes. So three stars for Judy Holliday and some funny ideas... subtract one star for dreadful songs... Two stars. I might be willing to watch it again. 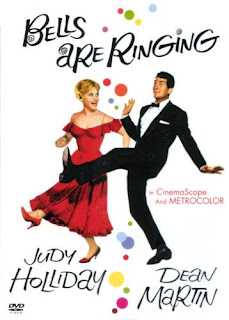 Ella (Judy Holliday) works for an answering service called "Susanswerphone." She is very good at taking people's messages and making wake-up calls. What she is not good at is dating. Susan keeps setting her up with nice men, and the dates all end up being disastrous - everything short of setting herself on fire. Ella just finds herself unable to talk to men in person. "You know, you're a good listener. That's an art in itself... helps to build the other person's ego," says her clueless date at the beginning of this film. Ella suffers through the date, of course managing to catch her dress on fire on the way out of the restaurant. Ella shines on the phone, though. She manages to get involved in all of her clients' life stories. She even falls in love with one and has to put on lipstick before she calls him. Sadly, though, she speaks to him in an old lady voice, and he calls her Mom. Leading us to the first dreadful song:
*I'm in love with "Plaza 0 double 4 double 3" She muses about whether he's 6'4" or 4'3". Oh, she even sings part of the song to a canary.
*And then the client, Jeffrey Moss (Dean Martin) sings to himself in the mirror: "You gotta do it" Seems he's a struggling playwright.
The plot picks back up again when the ladies of Susanswerphone are accused of being a front for a "lonely hearts club." There must be no meeting up with any male clients or "you and the madam are going to be taking calls at the detention home."
It turns out there is something nefarious going on at Susanswerphone, though. A bookie charms Sue into letting him run what she thinks is a record company out of the office. Really, he has developed a code in which different bets are called different composers, pieces, etc. This leads us to the next scary song:
"It's a simple little system," a partially spoken word song in which many sketchy bookies sing about their tricky code.
Jeffrey Moss leaves his phone unplugged one day, missing his wake-up call, and we get to watch Ella crawl around on his floor after she breaks in to wake her up. He wakes up, doesn't know she's "Mom," and a romance begins. How does she know so much about him? "I'm very intuitive." What will come of her having met up with a male client?
*"So that's what he looks like..." Sadly, the comic scene above includes this dreadful song before Jeffrey wakes up.
Ella teaches Jeffrey that you can say hello to strangers on the street. He is so in love after this ("If I couldn't believe in you after everything that's happened to me today, I'd crumble away like an old sponge cake."), that he just has to sing...
*"I got a girl," which includes the lyric, "she's got a lot to recommend her for a girl."
Then we have a song-writing dentist, the "cha cha cha," a dance in the park, a very bizarre song about dropping names, and another scary number called "He's in love with Melisande Scott."
Judy Holliday rescues the movie again near the end, though, with some great physical comedy. I'm upping my verdict to "would definitely watch again," but I will be laughing at, not always with.
Posted by Jessica at 4:14 PM