Turner Classic Movies is really a wonderful thing... So many movies not available on Netflix or from the library... Like this one with Jimmy Stewart. Stewart is detective Guy Johnson, arrested for hiding a client who has been framed for murder. While in a train en route to prison, Johnson notices a newspaper ad that may just be the clue he needs to lead him to the real killer. Johnson's dramatic escape from the train is witnessed by poetess Edwina Corday, played by Claudette Colbert. The rest of the movie is one crazy hijink after another.
There is the kidnapping of the poetess,
The handcuffing of the poetess to himself,
The poetess's realization that Johnson is not a dangerous escaped convict, but a noble detective trying to save his client from death row... a realization that leads to many misguided attempts to help him, 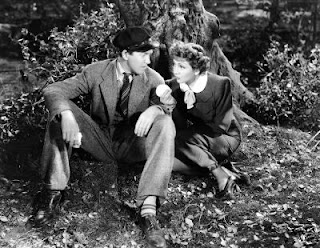 And a stolen disguise. 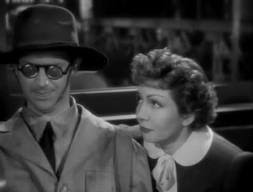 Apparently Claudette Colbert was unhappy with the bickering road trip similarities between this movie and It Happened One Night, but I didn't mind. Three stars just for reminding me that Jimmy Stewart can be good in laugh-out-loud comedy. I would be happy to see this again. "I swear by my eyes."
Posted by Jessica at 7:57 PM

I am relatively new to watching older movies (mostly on sites like netflix) and I had never heard of this movie. From your description and the pictures you put up it sounds more than worth digging the net to find. Thank you for reviewing this movie.

This movie is definitely worth finding, especially if you find slapstick funny.