When watching a classic movie marathon, it may be advisable for me to stop when the movies switch from black and white to color. Or maybe just to skip overly dramatic movies involving witches. 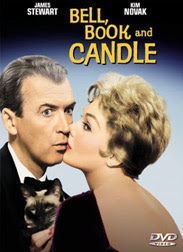 Gillian (Kim Novak) is a bored witch who longs to experience "normal" life.  Especially after running into her neighbor Shep (James Stewart).  Despite her aunt's attempts to persuade her to use magic to make Shep hers, Gillian is adamant that she will not mess with his life.  She holds strong only until she realizes that he is about to marry her college nemesis.  A little humming to her cat, and Shep falls madly in love with Gillian.  Drama ensues.  Would he really love her without tricks?  Is he really going to publish a book that exposes witches as real?  Is her warlock brother (played by Jack Lemmon) really providing the author of the book with information?  Will anyone forgive her for stopping the book from being published?  Will Shep still love her if she tells him the truth about herself?  Will she ever learn to cry?  And the drama goes on... 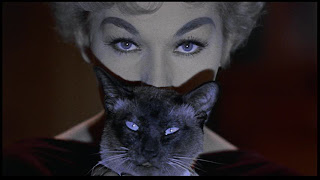 One star. I'm not sorry I watched it, but it did not quite help me to forget that I was running a 99.9 degree fever, and I really don't need to see this again. I did learn that after making this movie James Stewart asked not to be paired with young starlets as romantic interests anymore.  It was starting to feel creepy.  Good for him.  This is a lesson that Cary Grant never learned. The movie also made me reminisce about Veronica Lake's funny I Married a Witch (1942). I would definitely see that again.
Posted by Jessica at 12:18 PM

I feel the same way about this film. I picked it up at target for $3.75 and figured how bad could it be? Kim Novak and James Stewart... and it wasn't unwatchable, but it would be a long time before I pop it back in.

Not one of Jimmy's best, for sure. Although he is great to watch in anything.

Also, I have a new book, "Raised by the Stars" which will interest classic movie fans. Free free to mention in on your blog! :)

My name is Salvador, I am the Managing Director for MovieBoozer, a unique and fresh movie review blog that rates movies by beers, posts movie drinking games, with news, trailer reviews, podcast, and a web comic. We have been producing humorous content for more than a year. We have more than 20 movie reviewing contributors who are film students, graduates, and movie lushes reviewing movies based on our beer rating system. The idea is, if a movie is bad, drink more beer (Six-Pack being our worst honor). A good movie we recommend one beer which we call A Toast, we raise a glass of beer and toast what we loved about the movie.

I'm writing to say hello and introduce myself. I also review movies for MovieBoozer and I wanted to acquaint our blog with other movie bloggers. If you enjoy our content and feel the urge to let your readers know about us, awesome!

Hi there ! Just discoverd your blog this night and like it very much. I like how you talk about movies : with acuracy and no pretention.