Three stars - one for Uncle Max, one for the tap dancing one for Eve Arden.
Won't watch again - unless maybe in mute.

It seems to have been Doris Day Day on TCM this past Saturday. This early Doris flick is based on the broadway show "No No Nanette" it has a very silly premise that a girl and her guardian bet that she can't say "yes" to anything for 48 hours. Hilarity Ensues!

Featuring S.Z. Sakall - aka Sasha from Casablanca and the cook in Christmas in Connecticut. I'm getting so close to this man with the charming thick german accent combined with bumbling antics that make him non-threatening that I'm going to adopt him as my official vaguely-jewish honorary uncle. In fact, in the movie, he plays Uncle Max who is suprisingly BAD with money...what? What kind of vaguely jewish uncle is he?

Besides dear darling Uncle Sasha-Max, the best part of the movie is the tap dancing.*

Robert Osbourne of TCM tells me the songs all came from the vast library Warner Bros had purchased in anticipation of the advent of sound movies. Meaning, in Robert-Osbourne's euphemistic double-talk, that this music sat around for, oh, about 30 years and no-one cared to use it till now.

All the songs are pretty sappy and forgettable, but the dancing is great. Comparable to White Christmas.

I find it irritating that Nanette has to say "no" to anything she's asked, but sometimes she turns right back around and says "but I'll do it anyway!" - she a really bad cheater and it irks me, since that's the whole premise of the movie. If I were her Uncle Max, I'd have spanked her.

In typical DD fashion there is NO kissing, NO hugging, no emotion or sensuality of any kind. No stocking scenes, even! However, when the hero and heroine want to express their feelings and they can't dance, they lean their heads together and harmonize! Rapture!

*Strike that! Eve Arden is better than the tap dancing and I almost forgot! She gets a star of her own (I've had to revise to three stars). It's worth watching just for her reaction to DD. If the whole movie could be from her perspective, you'd have a classic. Just goes to show - a bitter and beautiful brunette is far more entertaining than an innocent blonde ANY day of the week. Even Doris Day Day. 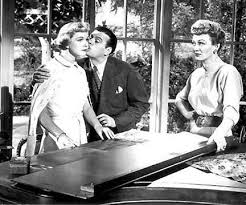