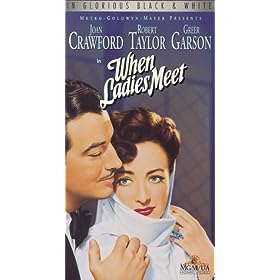 Great premise! Will definitely watch again, four stars.
I got this on Tivo when, after seeing The Women and then No More Ladies, I created a Joan Crawford wish list. This movie begs the question - are all Joan Crawford movies about infidelity and do they all have either the word "women" or "ladies" in the title? Can all problems be solved by inviting the key players to a weekend in the country? So far, the answer is yes!

An idealistic young novelist falls for her publisher, a married man. While writing a book about it, she theorizes what she would say to his wife if they met. Of course, in her book the two women speak to each other respectfully and with calm understanding of each other's position. Both her former boyfriend and the publisher try to tell her that in real life it would never be like that and try to convince her that her book has to be changed to make it more real (i.e. to make the women more selfish and more black and white - one evil and one good).

This movie also reminded me that when I was 19, I found myself canoodling with a guy one night and then the next day being introduced to his girlfriend. I was very proud of myself when I managed to get her alone and tell her the situation. She walked right back into the cafe (which he owned), slapped him in the face, and walked out again. She got in my car, and I drove her home - one of the single most gratifying evenings of my life. (But then again, I _am_ a lesbian, so I guess I'm _bound_ to pick loyalty to a girl over loyalty to some guy I didn't even like.) Anyhow, I was also young and idealistic enough to believe that there was good and there was evil and it was easy to tell the difference. Later, when I met my wife and she was in a relationship, I played the same tune that Crawford plays in this movie "if it's really the love of my life, it's all right" - and the truth is, it's not all right, it's terrible, but sometimes it happens. Very, very rarely do women stick together in this situation, but Joan Crawford and I can be forgiven for dreaming that it might be possible, I think.

But, I digress - back to the plot: in desperation, (desperation to win her back, not desperation to fix the book) the ex-boyfriend befriends the wife and brings about a meeting between her and the novelist in real life. We get to watch the scenario play out, and it's great!

At first, the two women don't know their relationship to each other, and they get along well. You find yourself cursing the evil ex-boyfriend. Then they begin to talk about the book and each woman makes her case for her own perspective...respectfully and with understanding of the other woman's position. You find yourself half rooting for them to be grown-ups and half wanting the other shoe to drop so that they can have their cat-fight.

Of course the truth comes out and then things get heated pretty quickly, but it's really interesting to see a movie that allows characters to have a certain degree of honesty about themselves...and yet each one has a blind spot. By meeting, they are able to point out each other's blind spots and there is a resolution, even if it's not a happy ending, per se.

On Tivo's LiveGuide this movie was billed as a romantic comedy, but the comedy is lightly sprinkled over the movie rather than really a part of it. However, there were some great comic moments, mostly derived from the interactions of the oblivious hostess with her weekend guests. I leave you with the words of the dotty hostess, Bridgie Drake:
"If a woman must make a fool of herself, the least a man can do is to let her be one in her own way."
Posted by Ms. Q at 11:55 PM

Sounds like a great movie. And I agree, a weekend in the country solves a lot.