William Powell and Myrna Loy.  What do you think I will rate this movie?
Susan and Steve Ireland are celebrating their fourth anniversary in a wonderfully witty Loy and Powell way.  Instead of exactly re-enacting their first date the way that they usually do on their anniversary, Steve suggests that they re-enact the date backwards.  Unfortunately, they are interrupted almost immediately by the arrival of Susan's mother, and hilarity ensues. 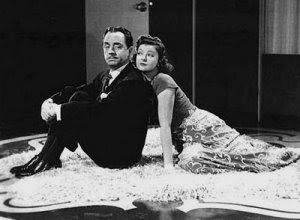 Steve gets stuck in an elevator with an old flame who lives a floor down, Susan's mother trips on the ugly anniversary present she has bought them, Susan has to run her mother's urgent pick-up errand, and a cooped up Steve ditches his mother-in-law to catch up with the old flame. All of this leads to divorce proceedings and Steve's increasingly drastic attempts to keep Susan from divorcing him over a misunderstanding. Oh William Powell, are you ever bad in a comedy? 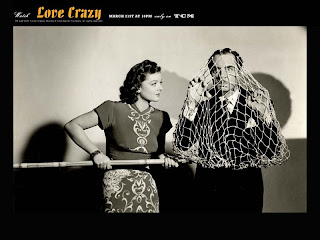 Four stars.  I would watch this again.  I'm looking into non-Thin Man Loy&Powell box sets...
Posted by Jessica at 5:50 PM

"Love Crazy" is among my favorite movies, and I do recommend you pick up the Loy-Powell box set. You'll also enjoy "I Love You Again" (1937). I'm also a big fan of Love Crazy co-star Gail Patrick. I go on and on about her over at my own blog.

I'vee seen "I Love You Again" and agree that it is also a wonderful movie. I'll have to look more into Gail Patrick.

Sorry, Love Crazy is one of those comedies that make me crazy crazy. I CANNOT stand when things start out okay and go haywire by accident and then have to be put back to rights...I practically have to pace to get through them. Wouldn't watch this again, despite the loveliness of Powell and Loy.