Sabrina (Audrey Hepburn) has spent years pining for David Larabee (William Holden). Her father is the Larabee family's chauffeur, and Sabrina has grown up on the outskirts of the Larabees' expensive lives, watching David from trees as he seduces woman after woman. 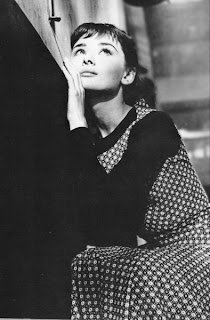 Being sent away to Paris for chef school is so horrifying that Sabrina attempts suicide. Luckily she is rescued by Linus Larabee (Humphrey Bogart), David's very serious older brother, and goes off to chef school as planned.

When Sabrina returns from Paris she is finally sophisticated enough to catch the eye of David. But when David's new infatuation with Sabrina threatens an engagement that was designed to benefit the family business, Linus steps in to try to derail their relationship by... spending lots of time with Sabrina and leading her to believe he is falling in love with her. 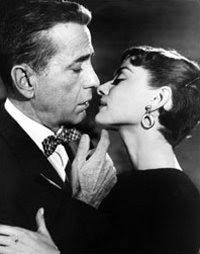 Does Linus really love her? And does Sabrina love David?

I am giving this three stars, partly just because I was so thrilled not to hate it like I did the remake with Harrison Ford. There are moments when I found myself cringing, terrified that Sabrina would get her heart broken in horrible ways. Because even if things work out all right in the end, there are some ways you just shouldn't manipulate your heroine!
Posted by Jessica at 8:42 AM

any movie with Bogey has to be good and this is a good choice. liked it alot. haven't seen it since i saw it in the movies, many moons age. thank you, deck

Oh four stars from me - but that's probably because I saw this before I saw that awful remake and because it was one of my first Audrey movies.

I will always love it - the two champagne glasses in the back pockets, perfect!

The mysterious, sophisticated woman getting a ride from the train station, perfect!

I thought the casting in the new version was good except for the Sabrina! She ruined it. Who can be Audrey and make both naive and self-possessed so believable at the same time? No-one but Audrey herself.

It's the same trick she plays in Roman Holiday as the Princess who has never seen the real world - and in Breakfast at Tiffany's as a lost little country girl inside a cosmopolitan veneer. It was her special genius to be able to play vulnerability so clearly without seeming to be aware of it herself.