When we first meet Lou (Mae West) she is wearing a hat that looks like a giant Wooly Bear caterpillar. She is crass, she likes to invite men to "come up and see me anytime," and all the men want her. And she gives people the scariest looks. 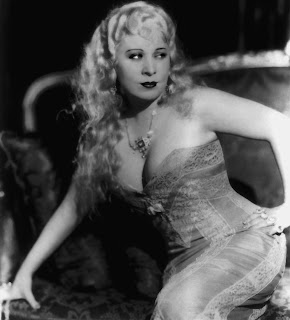 This movie has it all: a saloon, an omnibus, giant hats, puffy petticoats, a whole lot of crooks, a very young Cary Grant with lots of eye make-up, and hard to understand accents. Lou sings in a saloon. She's having an affair with the owner, but Chick, a dangerous crook in prison, thinks she's waiting for him. Lou seems vaguely interested in every man who crosses her path, but she is becoming especially interested in Captain Cummings (CG), the mission director from next door. He's a different sort of man. Why he has any interest in Lou is more confusing. But he does. 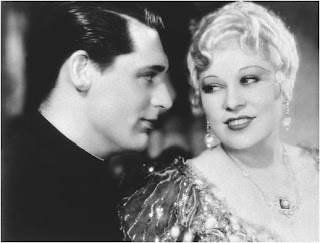 When Chick breaks out of prison we get to worry momentarily about who Chick will knock off for revenge.   And we also wonder what has happened to the sweet young woman who tried to kill herself in the saloon because of a failed love affair. Last time we saw her the lady crook Rita was asking her, "Can you sing and dance? Have you ever heard of the Barbary Coast?" And who and where is the Hawk, a new detective in town everyone is worried about? And what do these crooks do? After 49 minutes I still wasn't sure what they were all trying to pull off. Lucky for me, someone else had more of an attention span for this movie and was able to decipher the intricacies of the plot:
http://www.doctormacro1.info/Movie%20Summaries/S/She%20Done%20Him%20Wrong.htm

Anyways, once I understood the plot points I'd missed, I was able to enjoy it when Rita caught her man assistant giving her diamond brooch to Lou and declaring his love... 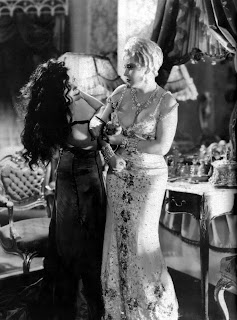 ...leading to more drama.
But do I really believe a Cary Grant character would fall for a Mae West character? Sorry. One star for brave hat wearing and drama. But I don't think I can give more stars to a movie that couldn't hold my attention or belief. Sorry again.
Posted by Jessica at 5:07 PM

Mae West was one of those stars who are original and there will never be another. great choice.

hi Amy, i love that name, it is my youngest daughter's name. i would like to offer if you are interested, classic movies. i have over 2,000 movies, most pre 1950, everything from silents to serials and i would be glad to give you any movie i have for your blog. your blog is great by the way. deck

Deck, that's very thoughtful! We'll try to remember to ask you whenever we are looking for something - sorry for taking so long to respond, if only this was my job so I could devote myself to it full time! ;)