Oh, Cary Grant. Here he is, Victor, an English lord, living in a castle with his wife Hillary (Deborah Kerr). They have opened up their castle for tours in order to raise some money. When the rich American Charles (Robert Mitchum) wanders into the couple's private rooms, he says many creepy personal things to Hillary, causing her to fall immediately and inexplicably in love with him. An affair begins. Victor, well aware of his wife's feelings, encourages Hillary to go off to London where Charles is. Victor believes the only way for him to get Hillary back is to let her have her fling and then realize where her heart belongs. 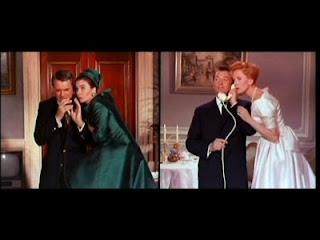 The movie is full of infidelity and calm, lordly conversations. When Victor invites Charles to come and stay at the castle after Hillary's week long London trip draws to a close, Hillary and Charles quickly realize that Victor knows all. And that he knows that they know that he knows... Needless to say, hilarity ensues. 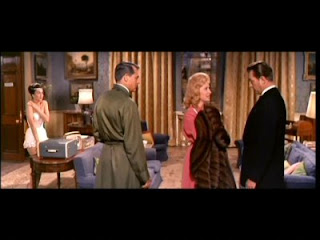 Two stars, because who doesn't love a good duel?

And because I own it... I will mostly likely see it again. The goal is to someday own all the Cary Grant movies I can get my hands on, whether I love them or hate them. According to carygrant.net there are at least 72.
Posted by Jessica at 2:28 PM

I love this movie. It's so funny. Thank you for reminding me of it.

Thank you for the information. I just love old movies.

Hi there, I am a Cary Grant fan too along with many other film stars.

I have all of Cary's films (72) I also have his uncredited film 'Without Reservations' but I do not as yet have 'Singapore Sue' I am not sure it exits.

I enjoy most of his films of course.