Irene Dunne, Fred Astaire, Ginger Rogers... of course I had to see this movie. Huck Haines (Astaire) travels with his band, The Wabash Indianians, and his friend John Kent (Randolph Scott) to Paris for a gig. Unfortunately, almost the second they step off the ocean liner, the owner of the club where they were supposed to play becomes horrified to learn that they are in fact Indianians and not Indians. The band tries to woo the club owner with a bizarre act in which they become a human piano...but to no avail.
With no more gig, John and Huck rush off to find John's aunt Roberta, who just happens to own a fashionable clothing store in Paris. Roberta is delighted to see her favorite nephew and says that she will try to help them find a new gig through her connections. It turns out that the band doesn't need Roberta's direct help, though, because out in the lobby they find the Comtesse Scharwenka (Ginger Rogers) complaining loudly and obnoxiously about a dress that has not come out quite right. The Comtesse is merely pretending to be Polish nobility to make her singing act more intriguing. Really she is from Indiana and happens to be the long lost close friend/next door neighbor of Huck. And she can get the band back into the very night club from which they were tossed for not being Indians. 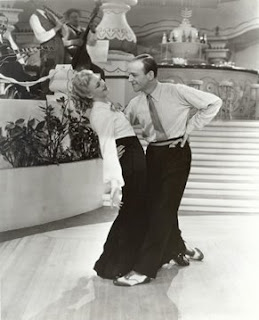 And I haven't even mentioned that Irene Dunne plays Stephanie, who works for Roberta. Stephanie and John fall in love at first sight, complications to follow. One of the largest complications seems to be that John is a "hick" with an attitude about fashion, and Stephanie is a Russian princess in exile. Hmmm.
The dancing was, as usual, exciting, especially a very cool tap dance pictured above and a dance to "I Won't Dance." And then there was the highly entertaining fashion show. My favorite quote from the fashion show is actually from my roommate Barbara: "Oh, a bird died." There were a lot of fur and feathers. 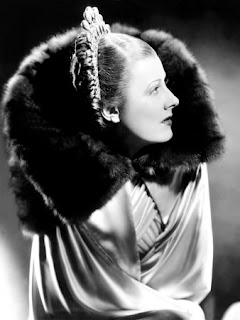 Other good fashion quotes from without the movie include:
"It's more stimulating to the imagination if clothes clothe." (John is VERY against skimpy dresses, and this fact leads to some of the plot twists of the movie.)
"[Women] can pack their own junk." (about a dress with pockets)
The movie also swung towards schmaltzy, though. Stephanie sings mournful songs, Roberta dies, everyone is tragically misunderstood. All except Huck and the Comtesse, that is. Two stars for my favorite dancers. Not sure I could watch again.
Posted by Jessica at 5:07 PM