It seems (conversation with Amy) that a classic movie on this blog is a movie made before Amy and I were born. So... 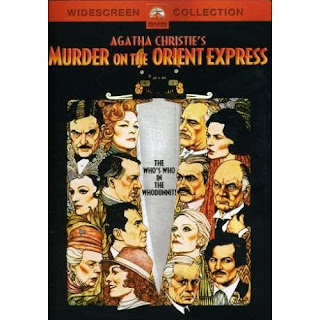 A thoroughly fun movie. Four stars, and I would probably watch this again, although it would probably be most fun if I wait forty years and forget who the murderer is. The chances of forgetting, though, are probably not so high, seeing as I (very smugly) guessed what was going on while watching this time (and no, I have not read the book).
Without giving anything away... Poirot is traveling on a train with a number of interesting characters... One fellow traveler confides to Poirot that he has been receiving death threats and wants Poirot to take on his case and protect him... Poirot refuses... A blizzard traps the train in the middle of nowhere... The man is found dead in his cabin... Who did it?
I loved the interrogation scenes and Poirot's helper who yelled, "He/she did it!" after ever interrogation. Murder aside, this movie also made me want to sit in a luxurious dining car and sip tea with my fellow travelers. Not sure about the sleeping cars.
Posted by Jessica at 5:06 PM