Frank Sinatra, singing mobsters, Robin hood references... a perfect movie for me, or so I thought. I just can't give this movie more than one star, and I'm not sure I could ever sit through it again. I could definitely sit down with David and make him watch the silliest songs with me:
*The boardroom "one for all" song about how great it is to be a mobster, in which we realize that Guy Gisborne is played by Peter Falk, and that Peter Falk can't sing
*The song about playing pool: when Little John (Dean Martin) runs the table and joins Robbo's (Frank Sinatra's) gang 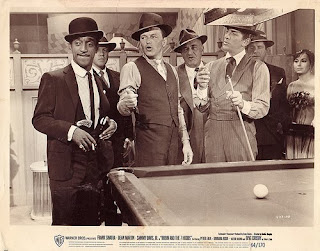 *Will Scarlet's (Sammy Davis, Jr.'s) song about how much he loves the sound of gun shuts... sung as he and Robbo's gang shoot up Guy Gisborne's gambling den (Barbara: "Tap dancing combined with shooting is just really weird.")
*The song about how bad a dresser Allen A. Dale (Bing Crosby) is, sung by Sinatra, Martin, and Crosby, as Crosby keeps jumping in the walk-in closet to put on funny clothes
*The song about how wonderful Robbo is for giving money to the home for orphaned boys... sung by... Bing Crosby and a troupe of orphans wearing hats like these ladies: 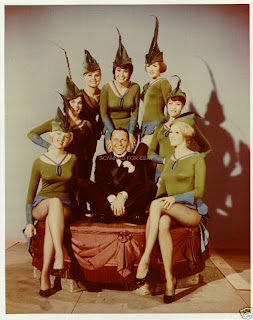 *The song about the evils of "Mr. Booze," sung in order to throw the police off the trail of the hidden gambling/drinking den
*And last but not least, the song sung by Sinatra, Sammy Davis, Jr., and Dean Martin dressed in Santa costumes when they have to go into hiding for their connections to a money laundering operation
There was one redeeming feature that made me laugh with and not at the movie: Occasionally the mobsters disappeared someone by putting their dead body in a cornerstone of a new building. This led to funny scenes at building dedications. But, why was this movie made? Has anyone else seen it?
Posted by Jessica at 2:26 PM

I haven't seen it! But, it looks...interesting! I like Bing Cosby though, so I might have to get on it.

Nice blog by the way. It's great when you find someone who shares a love of old movies.