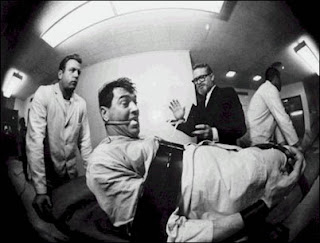 "The Company" secretly and selectively offers people the chance to have a new life by placing them in new and younger bodies. One of many problems is the fact that once you are a part of The Company, you can never get out alive. Arthur is brought to The Company by a friend he had thought was dead, only to be drugged and then shown a video of himself raping a girl while drugged. The Company threatens to release the video should Arthur not go through with the process of being "reborn." Having no choice, Arthur is reborn as Tony (Rock Hudson) and sent off to California to live as a young and already established artist. A body is burned in a hotel room, and Arthur is declared officially dead.
Tony meets a girl, frolics in a "stomping on grapes in a barrel" orgy, and generally enjoys his youth, until he starts to realize the being reborn comes with psychological trauma. He makes a mess of things, drunkenly talking about his former life and even contacting his/ "Arthur's" wife. Eventually Tony wants to start over again, but will he be allowed? Evil laughter here.
I don't know. Two stars again. Very interesting idea, but very silly movie all in all. Will not watch again.