What an annoying movie. My quest to find an old an un-insane Bette David movie led me to this accidental find while browsing in the library. Sometimes there is a reason for not having heard of a movie.
Joan Winfield (Bette Davis) is an heiress about to elope with a band leader she has only known for a few weeks. Her oil rich father does not approve. When Joan and her fiance hire a pilot to fly them to Vegas for a quick wedding, hilarity ensues. Pilot Steve Collins (James Cagney) has just lost his plane to creditors. What to do? Call up Joan's dad of course and offer to fly her to her dad rather than to Vegas. Collins charges $10 per pound, just the right amount to pay his creditors. Joan's father thinks this sounds good because, "She won't weigh so much after an all night trip."
Joan doesn't much appreciate having her fiance tricked out of the plane and then being kidnapped. Her early attempt to jump out of the plane backfires, though, when Steve loses control of the plane trying to stop her and they crash land in the desert. There is a running gag in which Joan and Steve take turns falling on cacti throughout the movie. The cacti get their own dopey music, and Joan, while she still hates Steve, gets to lie across his lap while he picks prickers out of her butt. All while going through his picnic basket of fattening food... Steve is still hoping to get more money upon delivering her. 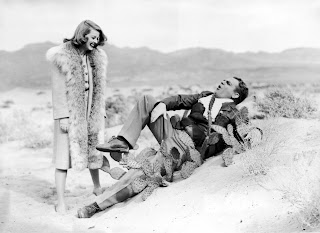 The dopey cacti music was just one sign that this was a dopey movie. Joan and Steve spend some time with an old hermit living in a ghost town, they cave in an old mine, there is a joke about marriage: "One of you's gettin' married, the other's going to jail. So you really got a lot in common," and eventually the characters don't couple up as originally planned. A slapstick comedy that caused more groaning and cringing than laughing. One star, and I don't really want to see this again. Still in search of entertaining early Bette Davis movies...
Posted by Jessica at 5:13 PM

"It's love I'm after", if you haven't reviewed it already. Awesome movie lol.

That movie is actually already on my "want to see" list, but it's not available through my library system or on Netflix as of yet. I'll have to work harder to track it down!