Browsing in the library and picking up an un-heard of movie... is it a good idea? Not really. 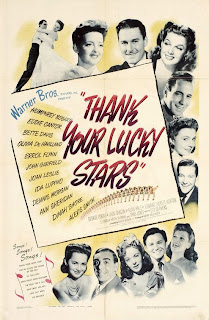 This movie has a lot of big names... most of them play themselves. Despite the fact that the synopsis on the box claimed there was a plot, it took a good 20 minutes before I believed there was one, because I just kept hearing the stars' names in the movie. And nothing was happening. Eddie Cantor (himself) hosts a radio variety show. Edward Everett Horton (not himself) and friend hear Dinah Shore (herself) sing on the show and decide that they must have her for their upcoming star-studded production. Sadly for them, Dinah comes along with allowing Cantor to be on the board, and Cantor has really annoying ideas.
Most of the plot comes from a wanna-be singer who ends up with a contract to sing on Cantor's show, without Cantor's permission. Excited wanna-be singer meets an annoying wanna-be songwriter woman, and the two of them, along with a "homes of the stars" tour guide, stalk Cantor as he throws them out of his sets multiple times. The tour guide, by the way, is played by Eddie Cantor. Much of this might have been at least a little funnier had the name Eddie Cantor meant anything to me before this movie. There is some hilarity (insane asylum, elephant...), but mostly there is just a really boring movie with some awful dialogue and musical acts.
Low points: Bette Davis's (as herself) number in the musical production and Olivia deHavilland's (as herself) number
High point: Errol Flynn's (as himself) musical number... "Oh that voice is so divine... I'm sorry it isn't mine"
Was this movie fun for the people in it? Was it entertaining when it came out? One star, and I really don't want to see this again.
Posted by Jessica at 1:27 PM