Another Esther Williams film that doesn't even feature swimming? What does she do? 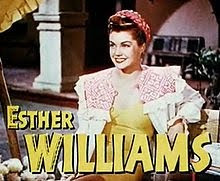 Bullfighting of course! My friend Yvonne and I sat down to watch this movie even after all of my warnings that a non-swimming movie in the Esther Williams box set volume 2 was bound to be scary. And we did have fun...
The story begins in a town in Mexico, when former star bullfighter Antonio Moralas meets his new baby daughter. He does very little to hide his disappointment that she is a girl. Even his assurance of, "Don't think I'm disappointed because she is a girl," is negated by his elation when a twin baby boy appears minutes later. "Gracias!" he tells his wife, and the whole staff is invited to drink to the baby boy. Even when the little girl grows up to be Esther Williams (playing Maria Morales), Mr Moralas only has eyes for his son, who he expects to become a great bullfighter like himself. Sadly for Mr. Moralas, though, his son Mario (Ricardo Montalban) is busy writing concertos that are "as beautiful as a hundred butterflies." Maria is the one who's interested in bulls. 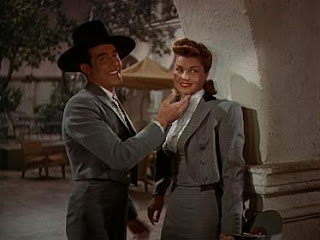 The plot thickens when Maria sends Mario's concerto to a famous composer, the composer shows up to meet Mario the genius, and Mr. Moralas hides the visit from Mario so as not to distract him from bullfighting. When Mario learns of his father's deceit he runs off. Of course the only way Maria can think of to bring him back is to dress herself as her twin brother and enter bullfights in his name. Of course.
Questions raised:
Does a bullfight really end when you tap a bull on the head? And does that really make the bull just lie down and act pleasant? Or does that just work for Esther Williams? I assume the real thing ends with something more gruesome... Perhaps that's why the camera swings away right before she taps the bull on the head...
Wikipedia article on bullfighting
Two stars, because I'm feeling generous, and someone was doing a nice job working with the animals in the bull ring, but once was enough.

Bullfights end with bull winning (poor matador) or a sword in the neck during a special, final ceremony.

Oh vicious, vicious Esther Williams. Were animals harmed in the making of this film?

where rubber meets the paper said...

I really enjoyed your movie review. Your style of writing made me feel like we were enjoying a cup of coffee together and discussing movies. I've added you to my blogroll because my husband is a huge movie buff and I know he will enjoy your reviews.

Thank you so much... Your comment made my morning!