"Oh Dexter, I'll be yar now... I promise I'll be yar." And with statement, the independent, smart, and funny Tracy Lord (played by Katherine Hepburn) gives in to her ex-husband (Cary Grant) and admits that women should be sweet and manageable and that she has been wrong to be so strong in the past. Warning: Although I do love some things about this movie, I'm not feeling very generous toward it at the moment. I forgot between viewings just how many painfully obnoxious moments there are.
The movie begins with Tracy preparing for her marriage to a second husband. The first marriage, we learn, ended because of Dex's (Grant's) drinking problem. A paper wants to do a story on the wedding (Tracy is high society), but Tracy is too private to allow photos. The paper's head honcho happens to have a story on Tracy's dad, who happens to be having an affair. He blackmails Dex into bringing a reporter and a photographer into Tracy's family home, promising to sit on the story on Mr. Lord as long as there's a story on the wedding. James Stewart plays the wonderfully sarcastic reporter who falls for Tracy. Much hilarity ensues, involving swimming, champagne, crooning, and huge hangovers. 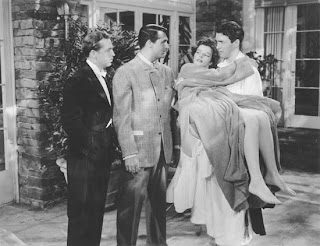 My problem with the plot, is that we are later shown that Dex's drinking wasn't really the worst of things in Dex and Tracy's marriage. The worst of things was that Tracy was a "distant goddess," unable to accept frailty in others or to offer womanly warmth and support. First Dex tells Tracy this. Then James Stewart makes some statements confirming it...only he doesn't mind. He's new enough to like putting her up on a pedestal as a "queen." Then... final straw... Tracy's somewhat-estranged father returns from his affair with a young dancer in NYC and essentially blames Tracy for the fact that he had an affair.
And here it is, the most annoying part of the movie:
Mr. Lord: What most wives fail to realize is that their husband's philandering has nothing whatsoever to do with them.
Tracy: Oh? Then what has it to do with?
Mr. Lord: A reluctance to grow old, I think. I suppose the best mainstay a man can have as he gets along in years is a daughter - the right kind of daughter.
And then he goes on to explain. You see, Mr. Lord just needed a way to hold on to some of his youth, but instead of being blessed with a sweet young daughter to help him, he ended up with a harsh, shall we say "shrew," of a daughter who had a "prejudice against weakness." Seems she didn't like putting up with a constantly drunk husband or a dad who was off very publicly cheating on her mom.
Another way of looking at this movie is that it is in the "divorced, but will they find their way back together?" category of films. Cary Grant seems to be in a bunch of these. I believe the lesson in this film is that if you let yourself be tamed, yes, you can have a second chance. Despite my rants, I'm still giving this three stars, because the acting was fantastic, and I'm willing to put some blame on the time period in which it was made. And Dex does at least tell Tracy, "Be whatever you like, you're my redhead," and he has given up his drinking when he returns. Anyways, I know I'll see this and rant and laugh many more times.
P.S. - Something enjoyable that does not come with a rant:
With 12 movies on this blog already tagged with "odd precocious little girl," I can't believe one of them was not this movie. Virginia Weidler, as usual, plays the perfect "odd precocious little girl," from her early comment about the papers being "full of innundo" to her dramatic interpretation of a spoiled little rich girl, when she and Tracy try to mess with the reporters sent to do the story on Tracy's wedding. 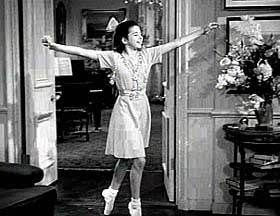 And of course there's her comment about the fancy dress she wears to the wedding...
Mrs. Lord: I think that dress hikes up a little behind.
Dinah: No... I do.
I am a huge fan of Virginia Weidler.
Posted by Jessica at 5:30 PM

where rubber meets the paper said...

As always, love your style of writing. Great post.

Another great post!
It's very difficult to find some of these great movies where I live. My only choice is to watch some of them on AMC because the movie rental stores don't usually rent older movies.
If I could suggest maybe for a future post you could give us something about Elisabeth Taylor since we lost her recently and she stared in great movie roles.

I realized this week that I don't think I've seen any of Elizabeth Taylor's movies. Do you have a movie of hers that you'd recommend?

You've probably seen her in Father of the Bride or Little Women (Katherine Hepburn version) right?

I recommend Cat on a Hot Tin Roof, A Place in the Sun or Suddenly, Last Summer - all of which are great, if melodramatic.

I haven't seen but would love to explore her younger years - National Velvet, Lassie movies.

OR I would love to see Taming of the Shrew, Cleopatra or Who's Afraid of Virginia Woolf...we have the throne from Cleopatra in my office...really!

Looking forward to your reviews!

Just realized I have seen Father of the Bride with young Elizabeth Taylor... Wait, didn't I just blog Taming of the Shrew?