About 20 mintues into the movie, Clarence (William Powell) storms into an agency that hires out maids demanding, "Where do you keep 'em?" You see, just a few minutes earlier Clarence had scared away the most recent maid in a long line of scared maids. The woman manning the agency desk tries to prevent Clarence from rushing into the room with the maids. When she fails, and he picks which maid he wants, the woman explains that she needs to know the character of the house to which the maid will be going before she can allow her to go anywhere with him. The reply: "Madam, I am the character of my home!" And here we have the main source of comedy and conflict in the movie. Clarence is a character. 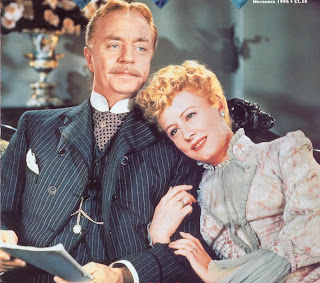 It is currently somewhere between 90 and 100 degrees outside and probably close to that in my apartment. I cannot think. I can barely move. I needed a funny movie to distract me. Unfortunately, this movie did not distract me. There is perhaps a reason I had not heard of it before I found it in Netflix's instant watch list. Many jokes were made, but they were often just too corny to laugh at. Two masters of witty dialogue and comic timing wasted.
Once Elizabeth Taylor, as a wide-eyed, bonnet-wearing young maiden, started asking Clarence Jr. if he believes in girls going to college, I decided never mind the temperature, I needed to at least be knitting so I could handle the rest of the movie. Then, during the whole to-do about how Elizabeth Taylor's character is a Methodist and the members of Clarence's family are Episcopalian and the ensuing drama about the discovery that Clarence was never actually baptized as a child, I started to pay more attention to my knitting than to the movie. But then I started to think, if only this movie ends with William Powell in a long frilly white gown getting baptized, maybe I will laugh.
To be fair, though, I did chuckle a few times throughout the movie:
*"You know your father doesn't like electricity!" (There were a lot of things Father (Clarence) didn't like, from kneeling in church to rubber plants.)
*"Do you ever play duets?"
"No, not till now."
"Neither have I, not till now." (Was this exchange between Elizabeth Taylor and Clarence Jr. meant to be funny? I'm really not sure.)
*Clarence discussing his pew and its falling property values with the minister and his wondering when it might be best to unload it.
*Clarence Jr. believing he is possessed by his father's old suit and not being able to do anything his father wouldn't do while he wears it. Elizabeth Taylor cannot sit on his lap, because it would be like she is sitting on Father's pants.
I cannot forget William Powell in this movie after puzzling over his bright red Technicolor hair for almost two hours, but from this moment on, I will do my best to forget Irene Dunn's part as his wife. In other words, one star, and I don't plan to see this again. I need a funny and GOOD movie!
Posted by Jessica at 5:53 PM