I love this movie. Joan Fontaine plays the second Mrs. de Winter, never given a first name in either the book by Daphne Du Maurier or the movie. While working as a companion to an elderly rich woman, the second Mrs. de Winter meets Mr. de Winter at a resort in Monte Carlo. He is moody and mysterious from the moment she meets him, an encounter during which he appears to be about to jump off of a cliff. She is completely unsure of what to make of him or if he even likes her. She is taken by surprise when he proposes marriage to her rather than lose her, when her companion packs up to sail off to New York. 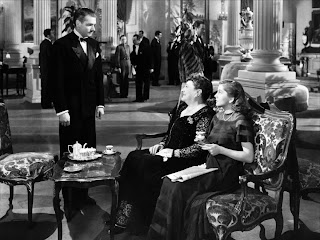 When the second Mrs. de Winter arrives at the luxurious Manderley with her new husband, we find out why it is that she has no name of her own. She is living in the shadow of the first Mrs. de Winter... Rebecca. She is also at the whim of the creepy Mrs. Danvers, who came to Manderley with Rebecca and has remained devoted to her even after her assumed death in a boating accident. Mrs. Danvers is not so happy to see a new Mrs. de Winter taking Rebecca's place. And Mr. de Winter is too moody and busy to notice what is happening to his new wife. Or does he regret having married her at all? 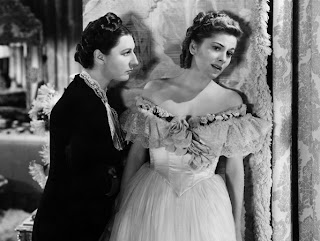 Really the only thing that annoys me in Rebecca is the way Mr. de Winter treats his new wife from the moment he meets her. I know he is supposed to be a damaged, grief-stricken man, but being damaged and grief-stricken are more handy for explaining away intense moodiness than for explaining away why he thinks his new bride is a little child.
(1)"I'm not hungry."
"Eat up like a good little girl."
(2)He hides her tennis racket behind a plant after declaring they should go for a drive.
(3)"Stop biting your nails."
(4)"I'm asking you to marry me you little fool!" 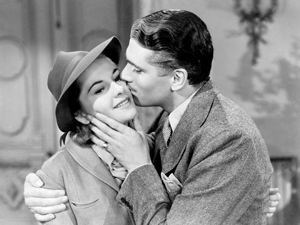 But the future Mrs. deWinter does not seem to mind any of this. It seems to be what she expects. It is only the intense moodiness that seems to get her down. I suppose I should just be happy to be a young woman in the 21st century. Three stars, and I want Joan Fontaine's wardrobe from the movie. I would definitely see this again someday. It also makes me want to reread the book.
Posted by Jessica at 4:49 PM

You ladies do a wonderful job! I love your unique tag-team blog approach and the film, Rebecca, is one of my favorites! I am just starting out. Would you mind checking out mine?http://thefinestthingsclub.blogspot.com