Fun Fact: My dad was in this play when he was at M.I.T. He played the husband of Jean Arthur's perpetually dancing sister. He got to play the xylophone.  James Woods, also a student, played the James Stewart character.  Confused?  See the movie.

You can definitely tell that this movie is supposed to be a play... A huge ensemble cast of zany relatives and action that takes place almost entirely in one room.  It's play-like quality allowed me to quite easily knit most of a hat my brother commissioned. 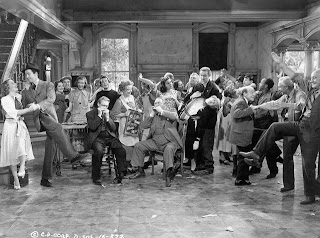 Things to ponder:  Is it okay for a wealthy young son (James Stewart) of a banker to marry the beautiful granddaughter (Jean Arthur) of a very unconventional man who believes in eschewing money so as to do only the things that make one truly happy?  Is it still okay if the banker is trying very unsuccessfully to buy said grandfather's house in order to be able to demolish an entire block for a new business compound?  And what if the grandfather's house is inhabited by many eccentric relatives and friends who busy themselves with anything from making mechanical toys to launching fireworks out of the basement? 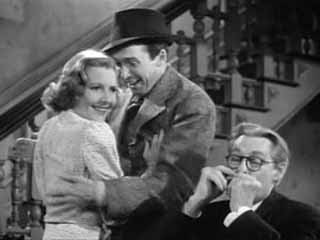 Three stars.  May have to see again to ponder my father's acting career.  My favorite part of the movie: Mr. Potter (Lionel Barrymore) as a jovial old grandpa with a harmonica... I wouldn't have recognized him at all if he had not had such a distinctive voice.
Posted by Jessica at 8:34 PM

I thought it was cute, but I can't believe it won best picture. It must have struck a chord during the depression.

I have watched this but really never was able to remember it well enough to blog. I'm not sure why - maybe because through the chaos very little plot emerged. Also, I just didn't care very much about the characters...I keep meaning to try it again. Two stars I guess. Plan to try to watch again...but not if anything better is on!

PS if your comment is really an advertisement, I'll remove it.
Carry on.