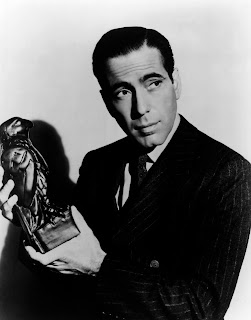 Sam Spade (Humphrey Bogart) accepts a case from a beautiful lady, Brigid O'Shaughnessy (Mary Astor), who says that her sister has run away with a dangerous man. She wants the man trailed and her sister back. When Spade's partner tails the man through the city, he is shot and killed. To complicate matters, the man he was trailing is killed just shortly after, and the police are trying to implicate Spade in the murders.

Spade then goes about trying to find out what the lovely Brigid O'Shaughnessy knows about the events that have unfurled and what she was really after when she asked him to tail a man. While wanting Spade's help to reach her true purpose, O'Shaughnessy has no intention of actually telling Spade all that she knows. She can spin a good lie and is used to being able to manipulate the men in her life. She is no match for the brilliantly sardonic Spade, however.

Brigid O'Shaughnessy: Help me.
Sam Spade: You won't need much of anybody's help. You're good. Chiefly your eyes, I think, and that throb you get in your voice when you say things like, "Be generous, Mr. Spade." 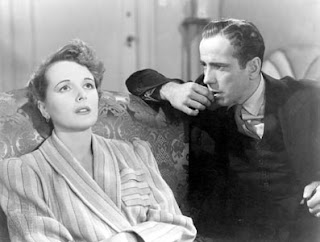 As Spade gets deeper and deeper in to the case he comes across a large cast of characters, including a wonderful criminal played by Peter Lorre, all in search of a valuable statue...the Maltese Falcon. I think that one of my favorite scenes may actually have been the scene where Peter Lorre's character shows up to try to search Spade's office. 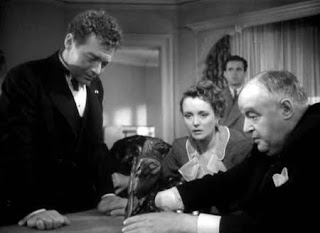 No more plot, because it's more fun to feel surprised in a movie like this. Four stars, mostly for Humphrey Bogart and his excellent delivery of funny dialogue. Will see again.
Posted by Jessica at 6:52 PM