This movie delivered all of the silliness that I have come to expect from a Ginger Rogers & Fred Astaire movie but oddly not all of the dancing. One of the "nearly" dance acts involved the two of them walking somewhat rhythmically back and forth on a ship.... But why did they not dance together more often?

"I haven't even met her... But I'd kinda like to marry her."
Petrov (Fred Astaire) is a ballet dancer (he can do anything!) who falls in love at first sight when he sees a flip book of the dancer Linda Keene (Ginger Rogers).

"What? You do not want to dance with the great Petrov? Don't be a silly horse!"
Petrov's first attempt to woo Linda involves pretending to a be a crazy man: dancing about her apartment, speaking in a heavy Russian accent, and telling her that she is not good enough to ever dance with him. It turns out that Linda is sick and tired of silly dancers falling in love with her. She is about to return to America to marry her long-time admirer Jim and get out of the dancing business. Petrov, his manager, and the whole ballet then set sail from Paris to America on the same ship as Linda. Petrov's manager shakes a former member of the ballet who is interested in Petrov by telling her that Petrov has been secretly married for four years. The rumor festers...

"Oh, you've ruined your sweater. I'll have to fix it now."
Petrov finally gets Linda to pay attention to him when he stalks her in the dog walking area of the ship. He starts paying other passengers to let him walk their dogs. Finally one day he has so many dogs with him that Linda's dog excitedly follows him. Soon Linda and Petrov are walking together daily. In fact, they walk so much that Linda's little dog gets tangled in his sweater and has to sit down and watch. 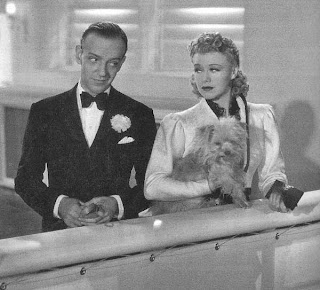 "Do you realize that you're the father of my child?"
A rumor that Petrov and Linda are married reaches the ship. Linda is horrified and thinks that Petrov has started the rumor just to escape another woman. When Petrov's manager is shocked to hear the rumor, Petrov points out that the manager in fact was the one who started it.

"Who's got the last laugh now?"
Linda charters a plane to take her off of the ship. She in her plane and Petrov on the ship eventually make it to New York. When Linda is forced to dance with Petrov in a restaurant where they are both dining separately she realizes just how much fun dancing with him is. Yay! A dance number! 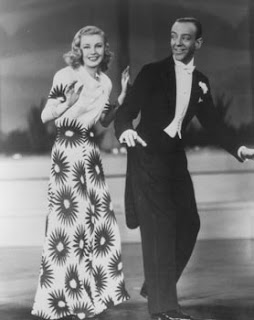 "I'll turn that dream stuff into a nightmare that will make history. Poor Lin."
Linda's manager wants to keep alive the rumors that she is married to Petrov so that she will not marry Jim and leave dancing. He comes up with a brilliant scheme to use a very realistic dummy of Linda that had been designed for some old promotion. He sneaks into Petrov's room at night, drapes the Linda model over him, and takes some new pictures for the press. Luckily, Petrov is such a heavy sleeper that he is not woken up by the flash bulbs.

"You like potatoes and I like potahtoes..."
In order to evade reporters, Petrov and Linda put on dark sunglasses and go rowing and roller skating in Central Park. This leads to song and roller skate dancing. A very good way to prove that you are in fact not a couple. 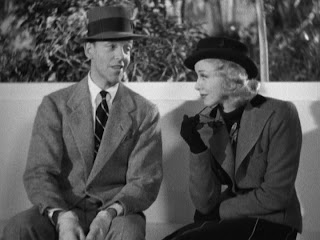 "Peter, you've got to marry me... If we can get married now, I can start divorce proceedings in the morning."
Again, another brilliant plan. Get married, so you can officially get divorced, thereby proving that you are not in fact married.

"I didn't realize getting married was so depressing."
After Linda puts on an amazing hat and marries Petrov, she begins to realize that she doesn't really want to divorce Petrov the next day. Until the original trouble-making lady appears in Petrov's room.

"All because of you and your practical dummy!"
Everything is a mess! Will Linda go through with the divorce? Will Petrov win her back with his crazy scheme to dance with dozens of women all wearing incredibly creepy Linda Keene masks? What will happen?

"If he couldn't dance with you, he'd dance with images of you!"
Awwww. And so on... I guess just two stars, as sad as that sounds, and I probably won't see this again. The Gay Divorcee is definitely my favorite so far.
Posted by Jessica at 8:42 AM

Interesting post but I have to say, I really love this film! First Fred&Ginger one i've ever seen.. and it got me into classics! (: It wasn't conspicuous to me that they danced less.. but then again, they tapdanced on rollerskates!
Btw, also love Ginger's "Oh, I seldom change boats on mid-ocean"-quote, haha ;D

I should probably add to my post that I watched this movie on my computer screen while home sick and grumpy from work. Yes, there were some really funny lines.