Gee, Gosh, was Nancy Drew really this ditzy? Not in the books. In fact, my friend Yvonne, who remembers the books quite well, was especially upset while watching Bonita Granville's pouty, ditzy performance.

In Nancy Drew: Detective, Nancy tries to find a missing rich lady who has disappeared right before donating a large sum of money to Nancy's prep school for girls. The search involves following a carrier pigeon by car, taking aerial photographs to find the kidnappers' house, and watching her friend turn an old x-ray machine into a radio transmitter to call for help. In Nancy Drew: Reporter, Nancy is disappointed in her assignment for a contest at the local paper and steals a real reporter's assignment. She finds herself trying to investigate a murder in order to clear the name of a framed woman. Nancy solves all of these crimes with the help of her reluctant "friend" Ted Nickerson (why the movie people changed his name from Ned is beyond me). She bosses him around, gets him in trouble, makes him dress up as a lady... he whines a lot and stumbles clumsily over things. 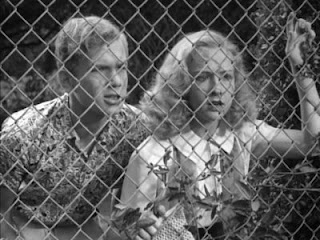 The world according to Nancy Drew:
"I think every intelligent woman should have a career."
"That conceited tweet-tweet!"
"Quit disturbing the molecules!"
"You hooligans!"
"I guess it's just my woman's intuition. Every woman has one, you know."
"Well statistics prove from ages 15-20 a woman is mentally 5 years older than a man of the same age."
"Guess my woman's intuition didn't function this time."

But, however ditzy she appeared to be in these movies, Nancy did get the job done. Two stars, and I really don't feel like checking out the rest of the series. My curiosity has been satisfied.
Posted by Jessica at 9:13 AM

The actress who plays Nancy was in one of my favorite comedies, "It's Love I'm After", with Leslie Howard, Bette Davis, and Olivia de Havilland. You should check it out, I love your blog and would like to hear what you think. :D

Frecklehead,
Thanks for the movie recommendation. I can't find "It's Love I'm After" on Netflix or in my library system... I'll have to track it down in a video store, though, because I love Bette Davis and Olivia de Havilland. And I'm really curious to see Nancy Drew in something else! Thanks for reading.