Oh, what a wonderful movie...

Tom and Ellen Bowen (Fred Astaire and Jane Powell) are a famous brother and sister dancing act in New York. Their agent's brother happens to be an agent in London (a very odd running joke in which Keenan Wynn plays the agent twin brothers and has them have odd phone conversations with their vastly different accents and slang). The British agent invites Tom and Ellen to perform in London for the month leading up to Princess Elizabeth's wedding. Before Ellen can leave she has to bid farewell to at least three guys she's dating. Apparently she's quite the player. As her brother says about the newest guy, "This'll probably be one of those long affairs that drags on a whole weekend." While sequentially saying goodbye to each hopeful young man before she boards her ship to England, Ellen overhears a dashing stranger doing the same thing with a string of women. 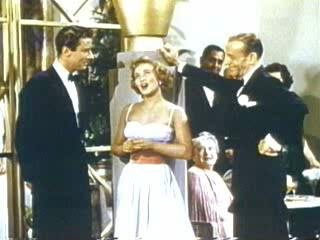 It turns out they are destined for each other. What begins with, "I surveyed the whole boat...you're the most attractive woman on board...I thought, too bad she's married... this is going to be awkward," turns into a relationship that continues in London and causes them both to drop their player ways (but not without some hesitation)...
"I'm in love with you?"
"Well aren't you?"
While Ellen tries out her relationship, Tom falls for an engaged dancer in their show. She makes him so happy he can do this:
Turns out Tom's beloved's fiance has been in Chicago for two years, and she hasn't heard from him the past two months... Hmmm...Could things be looking up for Tom?
Anyways, I truly believe that Fred Astaire could dance on a ceiling if he wanted to. This movie had great dialogue, fun dance numbers, and one of my new favorite actresses.
Four stars! I would watch this again.
Posted by Jessica at 6:01 PM

This is entertaining classic film blog! Have you thought about joining the Classic Movie Blog Association? You can check it out at http://clamba.blogspot.com/ or e-mail classic.movie.blog.assoc@gmail.com