Few things to note right off the bat:
- this version is not the musical
- this is going in my top ten - or at least my top fifteen 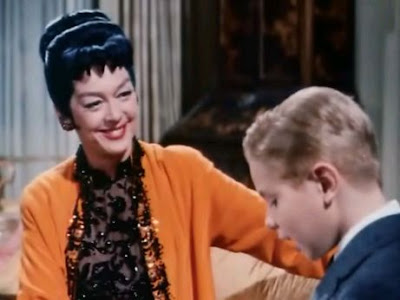 It turns out that Mame's frank manner and doting affection more than make up for her lack of experience. In a series of scenes from Patrick's life, we see him pulled between the staunchly conservative influence of the trustee of his father's estate "Uncle Dwight" and the flaming liberal influence of Mame.

It's a fun and funny series of incidents with lots of colorful characters and one very cute kid. I also loved the funky decor which almost functioned as an extra character. There are two long-suffering servant characters - a Chinese butler/valet and an Irish maid who are ridiculously and endearingly loyal. How they resisted making them sillier and more offensive I'll never know, but they aren't bad.

I am very fond of zany Aunt Mame and her antics. Four stars and I definitely plan to watch again.
Posted by Ms. Q at 11:50 PM

It sounds to be lovely series. I surely go for it. Thanks man !
Free Movies