I expected to have respect for this film, to believe that it was a great, well-made film. I did not expect to enjoy it. 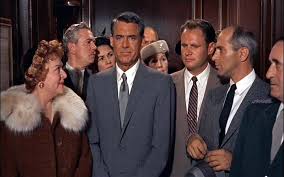 I just don't enjoy suspense. I'm tortured by it. And Hitchcock does suspense so WELL that I really almost HATE his films. Even though I really really respect what he's doing, it makes me miserable. So it was a complete surprise to find this film so funny, intriguing, even romantic.

Cary Grant plays a mild-mannered advertising executive who forgets about his mother's bridge game and that one mistake leads him into a plot he has nothing to do with...it's the kind of movie I hate, because the poor guy just keeps getting himself in deeper and deeper and you're yelling at the screen and hitting your forehead with your palm - but, I am here to tell you - I LOVE this movie!

And what is there not to love about lines like this?

"I'm an advertising man not a red herring. I've got a job a secretary a mother two ex wives and several bartenders dependent on me and I don't intend to disappoint them all by getting myself slightly killed!"

It's very funny for a suspense movie. And Cary Grant pratfalls his way through it almost as though it was a screwball comedy.

Also, even though I didn't really follow the plot (I was making french toast for the first half and went upstairs to get my house key back from a neighbor for part of the middle), I loved the plot twists.

I think that helped a little, too - being gone for a while. This IS a long movie with a lot of plot twists - I had always assumed that this scene: was the climax of the movie. So I was very surprised to find out that we were only halfway through the movie when we got there and we still don't really know WHO is behind the plot to kill the main character - argh! But if you don't spend too much time trying to talk Cary Grant to his senses.

Instead, enjoy the great costumes. You always know they are great costumes when you find yourself thinking "where can I get a blouse like that?" And starting an internet search for a billowy white blouse with three-quarter-length sleeves.

Also elucidates the usefulness of monograms and demonstrates how to mountain-climb in heels. Although I think stilettos might be preferable to wooden heels from what I can tell. Also, it's kind of like the first "National Treasure" movie, in a way, since you have to visit national monuments in order to progress in the story.

Cary Grant is always good under pressure. And you have to love a movie that involves scaling the noses of the "founding fathers." (Although why is Adams not on that mountain?) What do you think: Is attributing personality traits of all CG characters to Cary Grant the person related to anthropomorphizing animals? I'm guilty of both.

I know exactly what you mean about Hitchcock and suspense. I can watch open heart surgery, but I can't stand knowing someone's about to jump out from behind something, and that someone else might soon get slightly killed.

Jess: please tell me that you haven't also fallen pray the the John Adams mini-series? You who are my role model for reading 500-page presidential biographies?

Cheryl: It may help you to know that while he does get slightly killed, it all turns out okay. It's the slightly that makes all the difference.

Amy, I don't have HBO, or I would be watching Adams. I did read the book, though. And several others... don't worry, I can still be your rather warped role model.