Singing star (a la Elvis) Conrad Birdie is going to be drafted! Oh no! But that is not what the teenagers below are discussing in their wonderful "dancing while talking on the phone and clogging up all of the town's phone lines" number... No, just as worthy of hours of phone calls is the fact that Hugo and Kim (Ann-Margret) just got pinned! 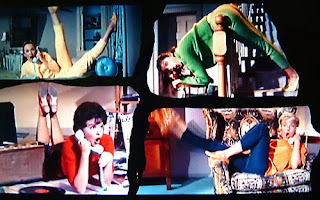 Adding more drama to the mix, struggling songwriter Albert (Dick Van Dyke)'s his soon-to-be-fiance Rosie (Janet Leigh) comes up with a brilliant and manipulative scheme to help Albert sell a song. Before Conrad ships off to the army, he will appear on the Ed Sullivan show to sing one last song, "One Last Kiss," and to kiss one last girl goodbye. And which lucky fan club member gets picked to receive the kiss? Kim, of course. Will Hugo like it? Will they remain pinned? Will Conrad and his hip-swinging, faint-inducing antics tear the town apart? 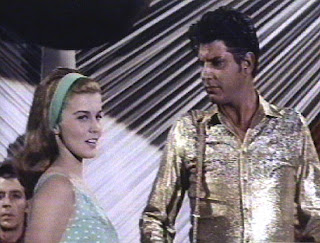 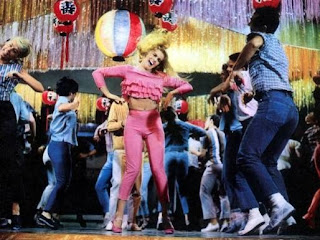 Four stars for joy inducing songs, animals and people being drugged with speed, crazy outfits, Dick Van Dyke dancing, and a movie that knows it is being over the top. The purpose behind this viewing was that David was Harvey Johnson ("Can I speak to Debra Sue...") in a high school production, and I was hoping to get him to sing along. I will of course see it again and again and again.
Posted by Jessica at 10:51 AM

Thank you. I saw Bye Bye Birdie but highly confused about the picture that you used. Is it Bye Bye Birdie or American High School?
Any Way have a nice time
bye

Hi,
Watch May be it is ok. I saw Bye Bye Birdie. Very nice and funny movie. Thanks for your nice blog job
Best of luck to you
bye
Dog Life Jackets

Hi,
May be . Thanks for your reply
Watch Movies online

hi,
Yes this is a very nice movie. I have also seen the movie. the video quality and the sound quality is very good.
Have a nice time
Dog Life Jackets