As huge fans of P&P, Jessica, my OTHER friend Jess and I all have strong opinions about the movie and TV versions. We all strongly prefer the BBC miniseries to any other version - all five hours of it.

However, Jessica and I had never seen this version, so we'd thought we'd check it out. 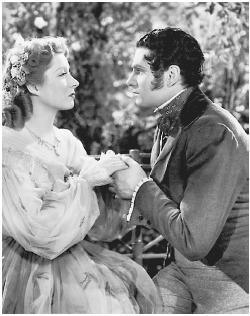 The first thing you notice - and how could you not notice? - are the HUGE dresses. Completely out of keeping with the period and not exactly fashionable in 1940 either. It's like they set this in the same era as "Gone with the Wind". We decided when we saw the stripes in the bottom of the bonnets that they just picked the period costumes they thought would be the most fun.

The entire plot is collapsed: the character of Wickham, who doesn't appear until what you might call the second act of the novel, is in the picture right away. He interacts with Darcy, which he never does in the book. And everything from the book happens strikingly quickly.

The score is very perky and ever-present which is odd for a period piece. Also the are all kinds of anachronisms - like the little tinkly bells in the shops and pig-tails on sister Mary.

The movie is so wrong that the few lines that are actually the same as they are in the book jump out at you.

However, and this is a big however, so it bears repeating - HOWEVER - there can be no denying that Laurence Olivier is a good choice for Darcy. The looks he gives Elizabeth, the way he works every moment that he is on camera - instead of just waiting for his next cue - really stands out. He is smoldering with desire, he is struck dumb with embarrassment, he is stiff and awkward with injured pride - I really believe, after seeing this, that Colin Firth studied him before playing Darcy in the miniseries and quite rightly so.

There are other problems with this movie, though, that make it hard to enjoy LO. It was Jessica who quickly observed that Elizabeth is too old. That's true, but it doesn't bother me nearly as much as some of the other things. Like the costumes, and the missing scenes. Most significantly: Elizabeth never goes to Pemberley, and Darcy never happens in on Elizabeth just after she has read the letter telling her about her sister's disgrace.

Will probably not watch twice.
Three stars. One is for LO. One is purely in honor of Jane Austen's great plot.
The other one is for going all out, whether or not it was poorly spent, it's clear that the studio went for it with the budget.
Posted by Ms. Q at 12:40 AM