Poor Stanley (Spencer Tracy) has to deal not only with the fact that his daughter is getting married...and he doesn't even know the financial stability or sense of the groom... but also with the fact that the wedding is going to be a humongous, expensive affair. 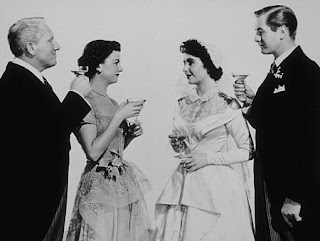 The conflicts the characters had were just so silly. The wedding was almost called off when the groom had an idea that the bride didn't like for a honeymoon destination. Also, if the family couldn't afford it and the bride, Kay (Elizabeth Taylor), really wanted a small wedding as she claimed, why did the family pay movers to have all of the furniture removed from their home so that they could host almost 500 people at the reception? And why was Kay wearing this dress? 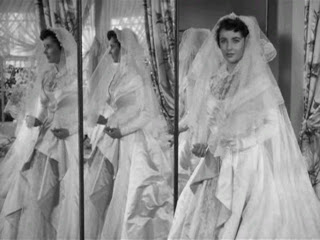 Weddings don't always have to make people crazy, right?
Two stars. I'm not sorry I watched it, but I probably won't watch it again.
Posted by Jessica at 1:57 PM

I believe you are not yet far enough into the planning of your own wedding to understand this movie because it is a perfectly accurate portrayal of every actual wedding ever - with only one exception that I know of - hippy friends who got married in a field, sewed their own outfits, picked their own flowers and boiled their own organic corn for the reception.
This is EXACTLY how it is: you want a small wedding, but your parents keep adding people to the guest list. You want everything to be romantic, so you try to get your fiance involved and when he finally does get involved, he has one stupid idea that he won't drop (red velvet armadillo cake, anyone?) and you want to love him no matter what but combined with everything else you are stressing about this one stupid thing is going to make you cry.
Everyone asks you about everything (my mother-in-law called me three times to find out when she could check in to her hotel, I could not figure out why she could not call the hotel once, but she could call me three times) - but you are not actually getting the final say in anything. And your wedding dress is not turning out the way you expected.
This is 100% pure, unadulterated perfect satire. I don't know why you can't see it, but I'll revisit it with you two weeks before your own small backyard wedding and see if your perspective has changed.

I hope, for your sake, that you prove to be exception number two.

I'm sure there will be some craziness involved in my wedding. I know that I cannot even begin to predict where that craziness will come from. Still didn't love the move.

We left our wedding to those who worries about flowers, colors and music. Just showed up for the ceremony and party and had a great time an left. Evidently it has no impact on the rest of your life and is much lower stress that way.

One of my all time favorites!
Glad to see another blog dedicated to great classic films