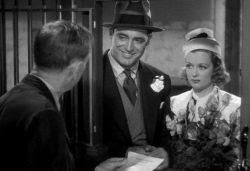 In this one, Charlie (Cary Grant) and Rusty (Joan Bennett) work on the paper together and are "almost married." After a botched attempt to get a marriage license, Rusty declares that it was silly of them to try, and they should just stay in their happy "almost married" state. Not even a night spent carousing with a silly archduke, about whom they want to write a story, can convince Rusty that really they should just break down and try to get married again. Not even when the archduke tells them, "Oh, but [marriage] is a divine madness."

So on they go with their lives as flirting reporters until Rusty is granted a month's vacation. While she is in New York trying to make Charlie jealous, Charlie gets a surprise promotion to editor. Rusty returns to find him no longer his old fun-loving self. She thinks up a giant prank to help him get his sense of humor back, but ends up getting herself fired. 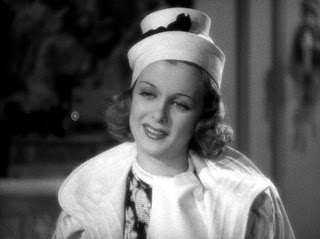 Rusty meets a new man on her way to New York to find a new job and soon finds herself engaged. What will Charlie do? Why, travel to New York to give her the best wedding present ever (involving fire trucks, ambulances, police sirens...).

No, the wedding movies are not my new theme (did you notice I watched Night of the Living Dead?), but maybe I can gleam some tips from all of these wedding-related movies... In any case, I would see this again (and probably will since David got me a box set that contains it). Probably just two stars from me, though: Fun and silly, but also dopey and silly if I'm thinking seriously about it, and it's definitely not as brilliant as its witty newspaper movie rival.
Posted by Jessica at 3:13 PM

I assume you're referring to His Girl Friday but you didn't name it, maybe they want to see the other one - cause it's like - the best flirtatious reporter-team movie ever. And yes, there were a string of reporter-movies for a while there - it goes: 20s - vaudeville stars - 30s - reporters - 40s - war heroes - 50s - advertising executives - 60s - fashion magazine editors

I did mean His Girl Friday, which I absolutely love. I like your summary of movie themes by decade. It puts the movies I've seen into a whole new context...

Of course it is all borrowed from a play - The Front Page (1928) - but the male / female roles were reversed. One of many do-overs (same title) was with Jack Lemon and Walter Mathau. No flirting here. HGF (1940) is by far the funniest and best.