I have a fascination with Revolutionary American history (especially Thomas Jefferson), so I got very excited when one of the blogs I occasionally read (http://boston1775.blogspot.com/ or http://americanrevolutionblog.blogspot.com/...sadly I can't find the post again) mentioned a movie set in 1777 in New England. Not only did it have a revolutionary theme, but it starred Burt Lancaster (known to me as an acrobatic pirate), Kirk Douglas, and Laurence Olivier. No Thomas Jefferson in this movie, but it seemed like it might be entertaining. It was, but possibly not in the way intended by the director. It contains lines like, "Stop howling woman!" 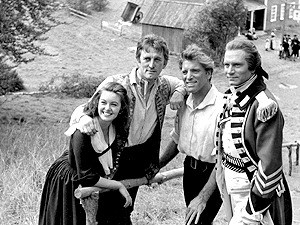 The movie is actually based on a play by George Bernard Shaw. Burt Lancaster (the man in the center who looks as though he would be comfortable swinging from mast) plays a minister, Anthony Anderson. Kirk Douglas plays Richard Dudgeon, "the devil's disciple," a man who left town long ago because he was tired of the religious ways of his family. Laurence Olivier is a relatively kindly British officer. Who is that woman under Kirk Douglas's arm? Why, it is Judith Anderson, the wife of the minister... This picture seems to hint at the odd love triangle that makes up part of the movie. Anderson and his wife are dragged into rebellion when the Laurence Olivier character hangs Dudgeon's father and leaves the body on display as a warning to all would-be rebels. Dudgeon returns to town to cut down his father's body and bring it to Anderson for a burial. When the British soldiers eventually realize that there is a new gravestone in the graveyard with the name of the man who was supposed to be hanging on display, they went to the Anderson home to arrest Anderson, whom they believed must have been behind cutting the man down.

Side note: I thought that Kirk Douglas's character was reminiscent of Beetlejuice and other Michael Keaton characters. Barbara felt that he reminded her of Matthew McConaughey.

In any case, when the British soldiers arrive at Anderson's house, Anderson is not home. He has gone to talk with a sick neighbor. Who is home? Dudgeon and Judith Anderson. Anderson thought that Dudgeon would be safe in his house, and instructed Judith to serve Dudgeon tea while he was gone, despite the fact that Judith claims to find him slimy and creepy. Dudgeon pretends to be Anderson and is arrested. It remains unclear throughout the rest of the movie whether Dudgeon has done this to get closer to Judith (about whom he makes many remarks throughout the film) or because he cannot help himself from protecting the life of another man. Long story short, Judith of course becomes infatuated with Dudgeon for what he has done, and Anderson goes into hiding and becomes a rebel, finally becoming the pirate Burt Lancaster that I know and love. But will Dudgeon hang? And will Judith ever love her husband again? Since I am only giving this movie one star and am not recommending it for viewing, I'll tell you. No and yes. All ends well in Revolutionary America.

(The star is for the best part of the movie...little paper action figures that act out marching and battles on top of a map during narrated portions between scenes.)
Posted by Jessica at 6:39 AM