Reasons that the original The Fly (1958) is classier than the Jeff Goldblum remake (1986):

1958- The Fly takes place in Montreal, and the characters have names like Francois, Phillippe, and Andre and live in a fancy house.
1986- The Fly takes place in a scary-looking loft, and Jeff Goldblum refers to himself as Brendel-fly.
1958- Classical music plays in the background.
1986- Yelling, screaming...
1958- The female lead wears a bow in her hair and bathrobes that are as fancy as her evening gowns.
1986- Jeff Goldblum picks up a trashy woman in bar who is only interested in him after he rips another man's s arm off with his newfound fly strength.
1958- Again, the clothes are quite fancy... especially when the main characters go to the opera.
1986- Not only are the clothes not as classy, but Jeff Goldblum spends a lot of time out of his clothes. Even while hugging a baboon.
1958- Andre and his wife drink champagne that has been sent through Andre's transporter.
1986- Geena Davis and Jeff Goldblum eat transported steak and discuss wanting to eat each other.
1958- After Andre is combined with the fly, he wears a black cloth over his head and conceals his fly leg in his overcoat.
1986- We watch parts of Jeff Goldblum's human body fall off, and he stores the disintegrating parts in the medicine cabinet. He tries to make Geena Davis (and us) look at them. 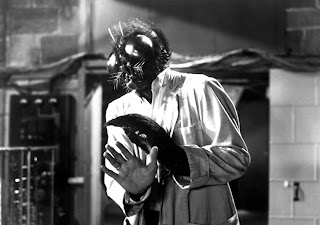 1958- Underneath his black cloth, Andre has a cute, fluffy fly head.
1986- Jeff Goldblum looks like rotting flesh, even at the end of his transformation.
1958- Andre eats under his black cloth and has his wife go into the other room while he is eating.
1986- Jeff Goldblum throws up on his food to digest it. Geena Davis watches. We watch.
1958- Everyone is cheerful, even in the face of great tragedy.
1986- Geena Davis cries throughout the whole second half of the movie.
1958- A fly with Andre's head and arm is about to be eaten by a spider when it is put out of its misery by the inspecter and Francois.
1986- Geena Davis guns down Jeff Goldblum after failing to abort their possible mutant baby. 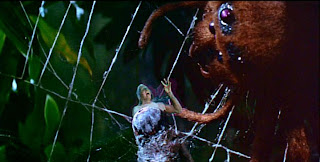 One version of the fly was enough for me, even if it was the less classy one. You know how I feel about horror movies, Jess, and there is room for only one giant mutant insect movie in my heart, and that is THEM.

Now I have seen The Fly again. I actually watched most of it with the sound off while at a Halloween party. I am changing my mind: would see again (the original).