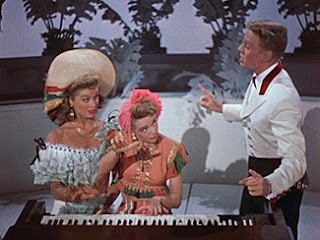 I can only hope that on the day of my wedding David and I get to perform a long song and dance number for all of our guests. In fabulous technicolor costumes.
This movie is Libeled Lady in color... Or so I think. I got this movie because it was a recommended Esther Williams movie and found out upon reading the DVD sleeve that it is in fact a re-make of Libeled Lady. After watching the trailer for Libeled Lady and reading Amy's blog post, I think it is pretty safe to say that Easy to Wed is just a remake in color...mostly the same dialogue, with a few changes: Lucille Ball for Rita Hayworth, duck hunting for angling, swimming stunts for no swimming stunts... The older movie does have William Powell and Myrna Loy, though, so I am ready to believe that it was a better movie. Now of course I very much need to see Libeled Lady to compare. 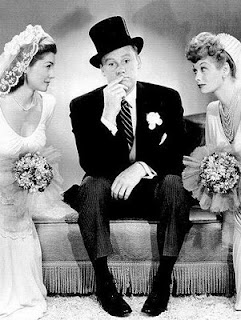 The movie starts with a slander suit. Connie Allenbury (Esther Williams) and her wealthy father are suing a newspaper for two million dollars for publishing an article that called Connie a husband stealer. Warren Haggerty comes up with a brilliant plan to save the paper... hire back Bill Chandler (Van Johnson), a reporter he had long ago fired and a man just sleazy enough to be willing to trick Connie Allenbury into actually stealing a husband, thus ruining her lawsuit. For Connie to actually steal a husband, though, Bill needs to be a husband. Haggerty gets his fiance, Gladys (Lucille Ball) to marry Bill so that Gladys can then discover Bill cheating on her with Connie.
Bill goes to great lengths to win the trust of Connie and her father. He even pretends to be an expert duck hunter, a lie which gets him invited for a weekend of hunting at the Allenbury cabin. While he's at the cabin, he realizes that Connie isn't actually the spoiled brat she appeared to be. She just comes across that way to protect herself after years of being harassed by men who want her for her money. 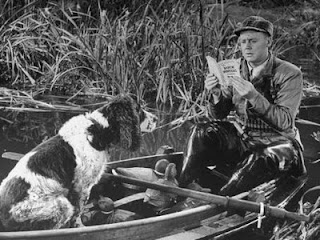 Once Connie trusts Bill, she drops her stuck-up act and... 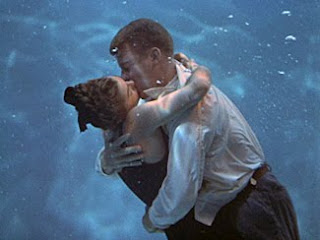 Now Bill has a problem, though. He is actually in love with Connie and no longer wants to go through with the plan. Much hilarity ensues. Some of it involves Bill and Gladys pretending to be ducks to learn the art of duck hunting. (Long video, but fun!)
So three stars, because it really was a funny movie. One of those stars is for a scene near the beginning of the movie when Esther Williams water skis down a giant slide standing not on water skis, but on a man's back. I'm not sure I'll see it again, though. I will see Libeled Lady.
Posted by Jessica at 6:41 AM

Wow, this is difficult, I think I have to see Easy to Wed. Because Esther Williams and the swimming stunts are hard to pass up.