Ah, movies from the thirties. This is what I should be watching more of. Roger (Gene Raymond) is the conductor of a band and quite a player. When he spots Belinha (Delores Del Rio) winking at him from her table during a performance, it doesn't take him very long to leave the conducting to Fred (played by Fred Astaire) and sweep her up into his arms for a dance. News travels fast throughout the hotel. When the first comment, that Belinha, the niece of a wealthy Brazilian woman, is dancing with a musician, eventually reaches Belinha's aunt, the comment has run through the rumor mill and turned into "Belinha is dancing with a gigolo." The aunt rushes down to the dining room to put an end to the dance, and a romance/battle of words has begun. I was loving the movie... the first pairing of Fred Astaire and Ginger Rogers, funny banter, amazing hats... 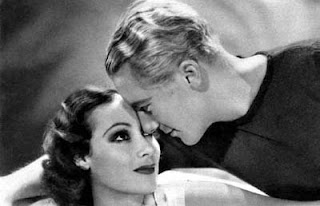 I was so happy... until I got to the spanking and the racism, all of which happened within a span of about five minutes. I will explain:
The spanking: Belinha needs to get home to Brazil fast. Her father needs her. It just so happens that Roger is a pilot, and that he and the band already happen to be going to Rio to play at the opening of a new hotel there. Roger convinces Belinha to fly in his two person plane (although he at first doesn't tell her he is the pilot and disguises himself in his flying gear so her aunt will let her go with him). Belinha is perfectly happy to discover that Roger is the pilot, but when Roger has to make an emergency landing on what they believe to be a remote desert island, all turns sour between them. Roger makes his engine trouble last by purposely losing an essential hose. Then he plays romantic music to get Belinha to make out with him. And then... she says something along the lines of, "No no no...I cannot do this...My family has arranged a marriage for me...I am engaged...We must never see each other again." Roger doesn't take well to Belinha's protest, Belinha slaps him, and then he throws her over his knee and spanks her a whole bunch of times reprimanding her for telling him off. Needless to say, when they have to spend the night on the island, she stays far away from him.
The racism: The morning after the spanking, Belinha looks into the trees and sees four or five black men looking back at her. She runs into Roger's arms screaming about wild men and cannibals. When Roger goes back to investigate, he finds out that she was not seeing cannibals, she was just seeing resort employees. They are in Haiti right next to a golf resort. This was supposed to be a funny joke.
The rest of the movie did have more entertaining moments, though. The hotel happens to be owned by Belinha's father, Roger happens to be friends with the fiance, and Fred Astaire and Ginger Rogers dance, all while Roger and Belinha spar and can't take their eyes off of each other. 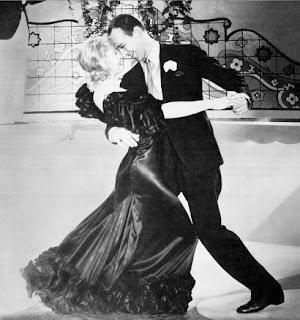 The best part of the movie was definitely when the band saves the hotel by creating the most spectacular opener ever: scantily clad girls dancing and doing acrobatics on the wings of planes in flight. At one point some of their clothes are even carried off by parachutes. At one point one girl almost plummets to her death and has to be caught by people on the plane below. Video below:
I also love the way in which Belinha's fiance finally gives her up...a parachute is involved. Two stars for silly acrobatics and fun. I could see myself watching this again, despite the horrifying parts.
Posted by Jessica at 10:10 AM

Five stars for this post, Jess! That's QUITE the video.

Was it racism, or was it mocking Hollywood's racist films? I, too, was concerned at the start of the morning scene in Haiti, but once the resort employee spoke in perfect, British English, I saw the scene as more of a mockery of other Hollywood films and attitudes at the time. What better way to mock racism than to imply it is correct, then knock it down completely. I remember a number of films from the 70s that use the same approach.

I think my opinion is supported when one views the film as a whole. For example, the scene showing the karioka dance portrayed people of African heritage as respectable (i.e. the singer) and alluring, quite a different attitude than most Hollywood films of the era. The film is not devoid of stereotyping, especially of Latin culture, but it crossed racial and cultural barriers better than most films made for the next 2-3 decades.