I want to go to Holiday Inn. But only if they promise that they've given up on the blackface acts. Be prepared for a really racist celebration of Lincoln's birthday, featuring the line, "Who was it set the darkie free?" Seriously.

So, I don't want to be at Holiday Inn for Lincoln's birthday. But I do want to ride in a horse drawn carriage instead of a taxi to be there to see Marjorie Reynolds and Fred Astaire dance with each other. Or just to see Fred Astaire do his Fourth of July cherry bomb dance on his own.

When we meet them, Ted (Fred Astaire) and Jim (Bing Crosby) are friends and fellow dancers.  After learning that Bing has wooed away his fiancee, another dancer, Bing goes off to his giant house in the country where he begins to renovate and create Holiday Inn.   He plans to spend most of each year on vacation, opening the inn just for fantastic performances on holidays.  Bing meets Linda (Marjorie Reynolds) at a performance in the city, and she comes out to the inn to audition for him.  They rehearse for performances, fall in love, and sing "White Christmas" together. 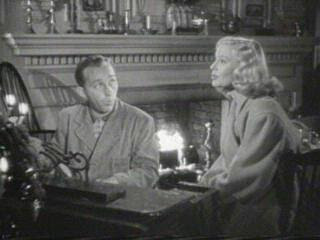 Sadly for Jim, Ted shows up drunk, having lost his dancer girlfriend.  Jim is convinced that if Ted meets Linda, he will try to steal her away both for a dancing partner and a girlfriend.  Ted is just this kind of friend.  Ted does meet Linda...he dances with her drunk... but once sober he cannot remember what she looked like.  He spends the next year showing up for holidays to search for his mystery woman, and Jim does everything in his power to keep them from meeting again. 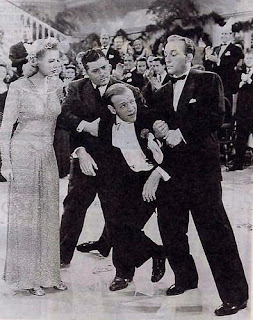 Much dancing and hilarity ensue.  (I'm probably taking a ballroom class this spring.  Can I please come out of the class dancing like this?)
So, I'm sure I'll see this again some other Christmas season.  There are so many parts I like.  If Lincoln's birthday had not existed, I would be giving the movie four stars.  How much can I forgive old movies?  Jury is out.

Here is a movie so unbelievably wonderfully bad that I have had to re-watch large portions of it two times in under a month to share it with my dad and my boyfriend.  All lovers of bad science fiction MUST see this movie.  I've just learned that this was in fact used in an episode of Mystery Science Theater! Perfect.
Oh, where to begin?
The children of Mars have no real childhood.  From the time they are born, information is piped into their little heads, so that they are really like mini-adults, seemingly with no emotion (although that could have been due to the quality of acting).  When we first meet the Martians, we learn that the children, in need of childhood as they are, have become addicted to Earth tv, especially to broadcasts about Santa Claus.  Concerned Martian leader, Kimar, calls together the Martian council and goes off to talk to the wise and creaky elder Chochem.  Once Chochem explains the detrimental effect of not having a true childhood, the council decides that the thing to do is... go to Earth and kidnap Santa Claus! 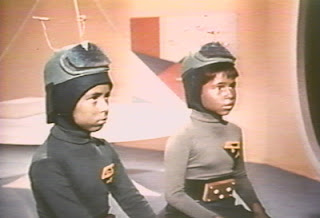 I should take this moment to mention that the photo above is indeed of Martian children.  Green face paint and antenna on your helmet designate you a martian in this movie.
When the Martians land on Earth they meet and capture young Betty and Billy Foster, who tell them that Santa lives at the North Pole.  The children try to escape to warn Santa, and much drama ensues, involving terrible acting by the Foster children, silly antics of the Martian Dropo (their resident idiot?), a narrow escape from a man wearing a really bad polar bear costume (meant to be a polar bear), and a final capture by the cardboard robot pictured below. 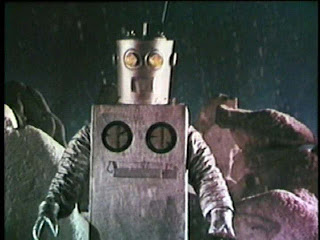 Santa is captured and brought to Mars, along with Betty and Billy, where he immediately inspires the Martian children and begins to manufacture toys in a factory made for him by the Martians.  Santa chuckles a lot.  Dropo continues to be silly. 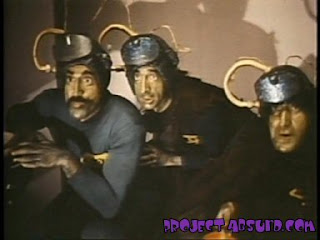 Conflict boils over, however, when the evil Voldar, who has been grumpy about the plan to bring Santa to Mars all along (grumpy to the point of having made an attempt on the lives of poor Santa, Betty, and Billy!) sabotages the toy factory and tries to kidnap Santa.  See how angry he is below? 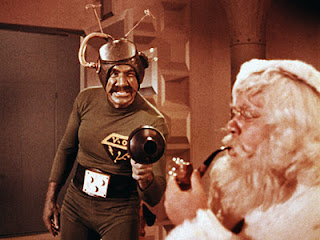 I will go ahead and ruin the ending for you.  All works out well, the Earthlings get to go home, and Dropo becomes the Martian Santa Claus. 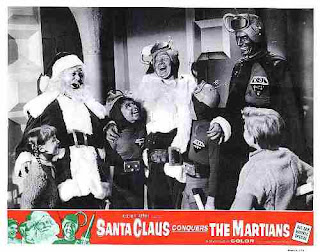 One star for my favorite scene involving Santa Claus's brilliant escape from an airlock on-board the martian ship.  It is worth seeing the movie just for this scene.  I am sure that I will someday see this movie again in its entirety, and there are so many people in my life who may soon need to be subjected to at least a few scenes.  So convenient that it is an "instant" movie on Netflix!
Posted by Jessica at 5:12 PM No comments: 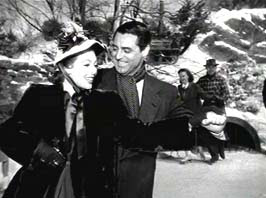 But still, Cary Grant is perfect.  And he is a real angel.
This is possibly the definition of a feel good movie.  A bishop is busy trying to get the money to build a new cathedral and is ignoring his wife and daughter.  In swoops an angel to subtly help him see what is really important in his life.  Yes there is some drama, and there is some conflict.  There is even some relationship sketchiness, but there is never any doubt in your mind that all that happens is for the good of the characters and will lead to immense happiness.  Three stars, and I will see this again some other Christmas.