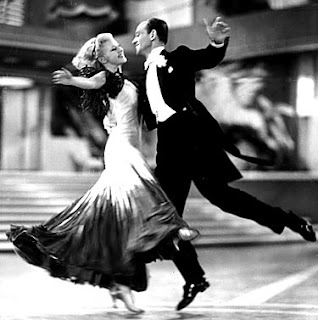 Mimi (Rogers) gets the end of her dress stuck in her aunt's trunk as her aunt locks it. Guy (Astaire) comes by and saves her by quite shockingly ripping her dress. He is smitten. She runs away. He spends weeks in London standing on the sidewalks and starting at every woman's face to find her until he finally rear-ends her car by accident.

Lucky thing that Guy thought to buy a "Road Closed" sign at a sporting goods store. What a good way to bring a high speed car chase with one's beloved to a halt.

Girl starts to fall in love...

After losing Mimi again, Guy happens to find her at an ocean resort. She is there to try to secure a divorce from the geologist husband she hasn't seen for years. He is there with his lawyer friend who is helping Mimi to secure the divorce. But of course Guy does not know Mimi is the woman his friend is helping. Guy is charming and sweeps Mimi off her feet. 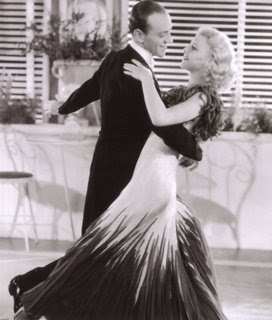 Girl becomes convinced guy is a gigolo (rather, a correspondent)...

The plan that Mimi's lawyer has concocted to secure her divorce involves her spending the night with a hired male "correspondent" and then getting caught by some detectives. Guy unknowingly says the code phrase to Mimi that the correspondent is supposed to use to find her, and Mimi is furious that Guy is not really interested in her but is there for a job. One of many many similar jobs. 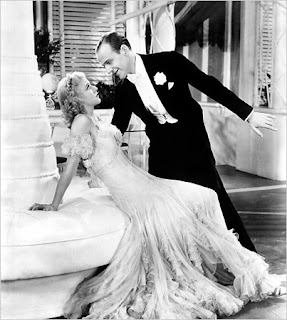 They even twirl up onto chairs and over tables.

Dancing solves all problems, of course!

I hope I get to see this again. It's now my favorite Ginger Rogers & Fred Astaire movie. Four stars!
Posted by Jessica at 2:39 PM No comments:

Danny Ocean (Sinatra) gets together with his eleven buddies from World War II to put together a huge Vegas heist. After much work to assemble the crew (really a huge portion of the movie), the heist is pulled off. Then hilarity ensues following their discovery by a soon-to-be-stepfather of one of the crew. With three singers, Sinatra, Dean Martin, and Sammy Davis, Jr., there are even a few musical numbers thrown in. I'm not feeling like I have a lot to say about this movie. I saw it during my last week of school...I fell asleep and had to re-watch large chunks of it a few days later. So, while I did think it was a good movie, I'm not really feeling inspired to say much. 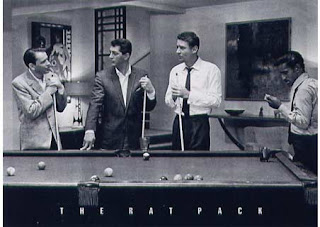 So...three stars.  And I would see this again due to the wonderful ending about which I will say nothing so that it can be a surprise for anyone who has not yet seen it.
Posted by Jessica at 2:38 PM No comments: