To cuff or not to cuff? Another silly, but fun, film. I found it was best not to think too much about the plot.
Lucky (Fred Astaire) is about to get married, but his band members are concerned marriage will get in the way of the band's future. The film opens with Lucky's band members very skillfully tricking him out of getting to his wedding on time just by drawing cuffs onto the pant legs of a man in a magazine and telling Lucky that cuffed pants are in. Lucky has to go off and get his pants cuffed (minutes before the wedding, we are led to believe), discovers his pants are un-cuffable, and misses his wedding. He is then told that he has to raise a whole lot of money before he can be allowed to try to marry his spurned fiance again. So Lucky goes off to New York with the band to play and gamble, and he meets Penny (Ginger Rogers).
Penny is a dance instructor and wants nothing to do with Lucky after he annoys her on the street. Lucky pretends to need dance lessons, though, messes with her for a while, and then before you know it, they are an amazing team. 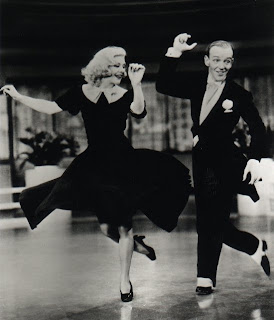 Lucky starts to think that maybe he doesn't want to raise all that money to marry his old fiance. I appreciated that Astaire and Rogers sang and danced to "A Fine Romance," a song that I love, during a snowy getaway together. Not the most exciting dance ever, but fun. And they got to wear fantastic hats. 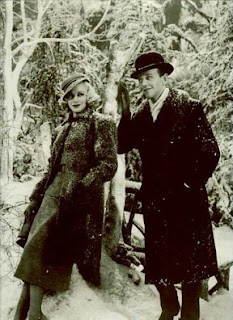 Then suddenly, over an hour into the film, blackface? Why? Apparently the scene is some loved tribute to Mr. Bojangles, and we're supposed to be really excited that Astaire can dance with shadow selves. Hmmm... It's just always a bit hard to forgive these moments. I know the film is old, but people still could have had more sense.
Fun film, but two stars. Not my favorite Astaire and Rogers plot.
Posted by Jessica at 7:13 AM No comments: