Let me first say that I watched this movie in three installments at the gym.  This led me to wonder really inconsequential things, like, why does Amanda (Marilyn Monroe) knit in the first section of the movie but not in the second section?
"What are you making?"
"I haven't decided yet.  It keeps my hands busy."
It turns out she does in fact knit in the third section... she knits sequined yarn in a musical fantasy dreamed by Jean-Marc Clement (Yves Montand).  Phew.  I was worried about continuity.
I also noticed that I was not in any rush to go back to the gym to find out what happened to the characters.

Let's Make Love is your standard "I must pretend to be someone I am not so that you will see the true me and love me.  And then you will quickly (VERY QUICKLY) forget how humiliated you felt by my lying and fall into my arms" movie.  Sometimes this works for me, sometimes it doesn't.  This time it didn't.  Maybe because I just couldn't get myself to care at all about the characters. 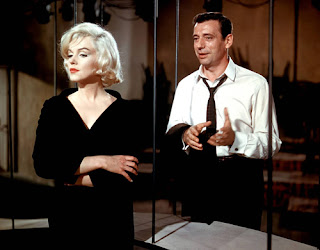 Poor Jean-Marc Clement.  He is a French billionaire, and someone is making an off-Broadway musical that uses ten seconds of its stage time to make a joke about him!  His PR man convinces him to visit a rehearsal to show that he can laugh at himself, thus making other people laughing at him seem a little more friendly.  And there on stage at the rehearsal, slithering down poles in a sweater and panty hose, is Amanda (Marilyn Monroe).  Jean-Marc is told he bears a striking resemblance to Jean-Marc Clement, Amanda makes disparaging remarks about the "real" Jean-Marc Clement, and Jean-Marc decides to assume a new name and get cast in the show as himself to get close to Amanda.

Highlight for me:  When Jean-Marc needs to learn how to dance (so to better woo Amanda), Gene Kelly comes to his office and gives him a lesson.  Not a great scene, but got me to perk up and pay attention.  Cameos from Bing Crosby and Milton Berle as well.

Two stars, and I don't want to see this again.