The melodrama is summed up for me by the exchange below:

Stanley (Bette Davis) has just thrown a fit about not wanting to leave a restaurant yet, even though her new husband Peter needs to get home and to bed for work the next day. Peter leaves miserable and without her. When he gets home, however, he finds that she has jumped into her car and sped home to beat him there...
Peter: You ought to be spanked.
Stanley: For being a good wife?
Peter: For making me love you so much.

In this film, Stanley cheats on her fiance and runs off with the husband of her sister Roy (Olivia deHavilland). Roy is heartbroken, and takes solace in the arms of Stanley's ex-fiance when what starts out as a comforting friendship between the two of them turns into a romance. Stanley, meanwhile, cannot settle down... she burns through her marriage (see the labels for a spoiler), and returns home to wreak more havoc. Stanley may or may not want her old fiance back, may never learn to drive safely, and may never learn to be ethical. By the end of this movie, Stanley's behavior threatens not only the happiness of her own family, but the future of a family (mother=Hattie McDaniel) which has worked for Stanley's family Stanley's whole life and adding a theme of societal racism to the film. Much drama. 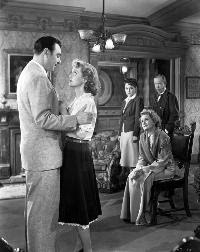 Two stars, because the actors were good. But really, too melodramatic for me. I don't think I'll be seeing this again.

"[Stanley needs] someone to boss her."
"She'll have a husband soon."

"You little minx." (said to Stanley by her uncle)

"You little flirt." (and again, the uncle)

In response to why Stanley's mom (Billie Burke) is so calm about Stanley having run off with her sister's husband: "We've got her on the drugs."
Posted by Jessica at 4:10 PM 1 comment: