Hmmm.  I do remember that I did not love the book.  Or rather, I loved the first half and didn't particularly like the second half.  Not so sure how I felt about the movie.  A little hard to watch.  I think I was knitting, though, so at least I was getting something done. 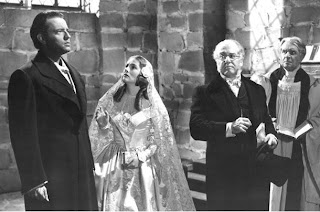 I think my problem with Jane Eyre, or at least with this adaptation, is the usual problem of not understanding why the heroine is in love with the man.  Makes it hard to care what happens to them.  Orson Welles plays such a distant and sometimes cruel Rochester.  I was rooting for the movie to diverge from the book so that Jane could end up with the nice man she meets after her failed wedding attempt.  But it was not to be.  Maybe Rochester was just as hard to take in the book - I read it so long ago that I really can't remember - but having to see him and listen to him made it so much worse.

One star.  Probably won't see it again, but I would be willing to watch other adaptations.
Posted by Jessica at 3:21 PM

I love to watch movie. Here i have a blog with lots of new movie. Check it