Life is grand... Dorothy (Jane Russell) and Lorelei (Marilyn Monroe) are off to Paris, and who happens to be on their ocean liner? The US Olympic team! Dorothy gets to cavort with the Olympians (there is even a gymnastics dance), while Lorelei says goodbye to her trusting fiance who will be staying at home. 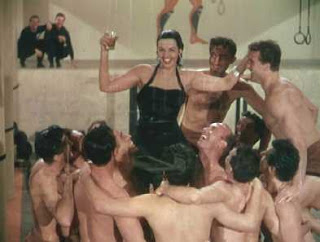 Hilarity ensues as Lorelei becomes rather friendly with a rich old owner of a diamond mine (he gives her his wife's prized diamond tiara!), and Dorothy becomes smitten with a private detective hired by the father of Lorelei's fiance to track her every move. 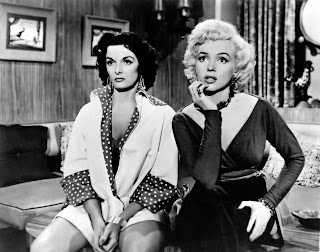 The women have to become very crafty in order to evade jealous fiances, angry wives, incriminating rolls of film, and French prison sentences. "I can be smart when it's important, but most people don't like it." Doesn't that sound just like a Marilyn Monroe line?
Such a fun movie. 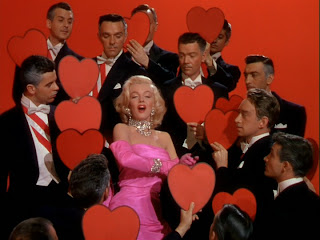 "Diamonds Are a Girl's Best Friend"
So yay! Four stars! Would watch again!
Posted by Jessica at 3:05 PM