I won't be seeing this movie again. I can say I've seen the famous blowing dress scene and move on. 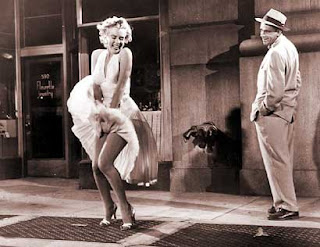 Richard Sherman's wife and son, along with all the wives and children of the New York businessmen, have left the city for the summer. So what are all the husbands to do? "Drinking, smoking, picking up girls, playing chopsticks..." 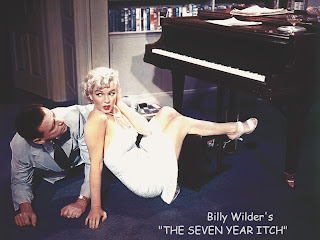 Richard Sherman wastes no time in getting to all of this, but it's okay, because he's been married for seven years, and it is a well-known fact that men experience a seven year itch and need to branch out a bit. And anyways, he just spends most of his time thinking about cheating and running around being sneaky... So no worries. Despite Richard's assertion that "no pretty girl wants me. She wants Gregory Peck," he quickly picks up his new upstairs neighbor Marilyn Monroe, known as "The Girl." Does she even have a name? She's ditzy, she wears sexy dresses, and she's willing to kiss him just for fun, because he's married and she doesn't have to worry about him proposing or anything. Richard narrates the whole movie. We hear his every thought. And I don't find him likeable. So can I give the movie zero stars?
Yes, I would have preferred: 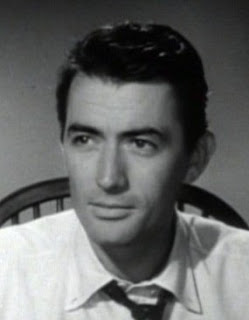 I take it your not a Marilyn Monroe fan?

I agree with you, Jess, Richard is annoying and pathetic - who would fall for him? But I have to give credit to Eva - because the point of the movie is watching the Marilyn character - and as always with Marilyn, you're asking yourself - is she really dumb, or really brilliant to be able to play so perfectly dumb? I won't say it's one of my favorites, but I do get a kick out of Marilyn's schtick.

The Kid In The Front Row said...

haha, your first sentence sums it up pretty well. I didn't love this film. But of course, Marylin was a delight to watch.

This movie was a real dissappointment, Marlilynn hardly shows up for the first 30 minutes and much time is spent focussing on Tom Ewells fantasy's which are uninteresting (per today's standards) and break up the flow of the movie. Iconic photo not with standing there are much better Monroe movies to view that I have enjoyed including, Gentleman prefer blondes, how to mary a millonaire, some like it hot, and even the misfits. The seven year itch is one to skip.